Trending Stories from The Marquee
You are at:Home»Features»Springdale Quartet
By Marquee Magazine on June 1, 2010 Features, Interviews, Sheila Moriarty 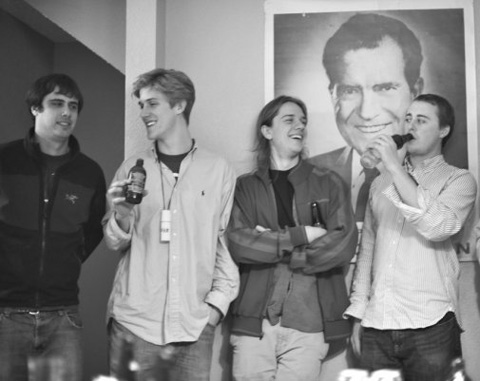 An air of inevitable good times resonates within the presence of Springdale Quartet. They are able to channel that spontaneity into an intricately structured and harmonized instrumental bliss and  controlled chaos.

Despite their spot at the recent Mishawaka Waterfront Music Festival, Springdale Quartet insists they are “not nearly as bluegrass as you think.”

The sound brought about by the solely instrumental  quartet is rather unique and original to the Front Range region. Heavy jazz tendencies are disrupted by funk lay downs, with blues and jam band elements integrated throughout.

The band consists of Jordan Roos on bass, Chase ‘Chaos’ Terzian on keys/organ, Ben Waligoske on guitar and Greg Russell on drums.

Springdale Quartet originally came together in Roos’ garage which, not-inconsequentially, is located on Springdale Drive. The boys were attending the University of Colorado when they met during a fateful twist of luck. After some weekly jam nights, guitarist Ben Waligoske joined the band just two years ago and they have been on the musical grind ever since.

Right off the bat, the band was picked to play the 10,000 Lakes Music Festival and this year they’ve gotten the nod to play the exclusive Denver Underground Music Showcase in July.

Live performances are ultimately what this group is about. Nevertheless, the band has spent time at the renowned Evergroove Studios, with hopes of getting their first full-length released sometime later this year.

“We have two albums worth of material and there has been talk of a double album. We really just want to get in there and throw some stuff down,” said Roos during a recent conversation with The Marquee and his bandmates. “At the same time, we don’t want to rush and put something together that’s not well thought out.”

Taking that time to think puts Springdale in an enviable position of not having to follow any timelines and thus getting to spend more time doing what they prefer — playing together.

“We are at our best when we’re listening to each other and being spontaneous,” Waligoske said. Terzian nearly interrupted to add, “It’s more about chemistry and the things that are happening between each of us during a show.”