Trending Stories from The Marquee
You are at:Home»Features»Tool
By Marquee Magazine on June 30, 2010 Features, Joe Kovack, Lisa Sicliano, Live Reviews 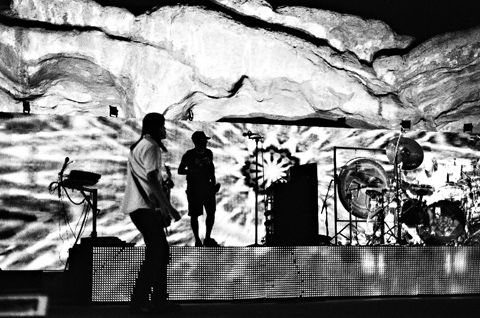 Tool Returns To Red Rocks For First Time Since 2001

It started with an illuminated face addressing the crowd from a screen the length of the stage, “Think for yourself, question authority.” Legendary counter-cultural icon Timothy Leary repeated the unofficial mantra of the band. “Throughout human history, our species has faced the frightening, terrorizing fact that we do not know who we are or where we’re going in this ocean of chaos. It has been the authorities that comfort us with order, rules, and regulations; informing, forming in our minds their view of reality. To think for yourself you must question authority.” Leary spoke as if a manifestation of the wizard in the Land of Oz. As the words echoed of the walls of Red Rocks Amphitheater, the hum of celestial electricity began to build, leading into one of the bands most prolific and spiritual songs, “Third eye.”

As the darkness grew around the amphitheater, so did the intensity of the crowd. Once into the first song, it became clear that the band was in control, with their hypnotic rhythms enchanting a crowd full of smoke and fog. With psychedelic patterns filling the backdrop and their signature lasers creating a blanket of light above the masses, Tool found a way to elevate the consciousness of the amphitheater by opening with a song rarely played live, yet executed with such vibrant precision that its impression could be felt for days. 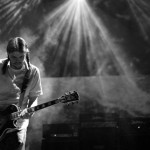 Without a beat the band moved into “Jambi”, a metrical song off their last album 10,000 Days. This as with “Stinkfist” and “Vicarious” was accompanied by familiar images on the screen of coinciding videos and imagery, pulsing in rhythm with the music as if all were one in this ocean of chaos. Halfway through the set was “The Patient” from their album Lateralus. As the beginning of the song meandered along its path, what looked like a harvest moon, orange, and nearly full began to rise on the horizon, filling the night sky with an apparition fitting for such a spectacle. With the song reaching its crescendo, so too did the orange moon, passing through a darkened cloud with perfect timing as if created by the bands art director and guitarist Adam Jones himself.

On the next song, enigmatic front man Maynard James Keenan reminded the crowd just how long they have been rocking the stage. “How many of you are 25?” he asked. “You were five when we wrote this next song.” It was “Intolerance” off their seminal second album Undertow, a delightful treat for the fans that rarely get to hear the great songs from their early days. As “Schism” and “Forty-Six & 2” rounded off their set, fans grew with wild anticipation for an encore befitting a band with music and imagery that captivates and moves the senses. 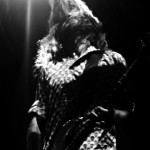 Waiting for the encore, all that could be heard was what sounded like various electronic pulses emanating from the stage. As the sounds began to grow, Danny Carey (clad in a Carmelo Anthony Nuggets jersey instead of his usual Lakers jersey) began directing the pulse with his drumming, leading it around the worm hole and back, creating a controlled chaos that only a drummer with his talent and genius could pull off. Soon guitarist Adam Jones and bassist Justin Chancellor joined the mayhem, building a sound and rhythm that could only be described as if experiencing the profundity of an out-of-body experience for the first time, only to be snapped vigorously back to reality with the sound of their songs “Lateralus” and “Aenima”.

Having been a fan of Tool since the seventh grade when Aenima was first released, I have been privileged to have seen them live six times since 1998. Though no Tool show shall compare to the first time I saw them at Ozzfest 98 with Maynard clad in a preachers outfit proclaiming the word of the Lord, this show at Red Rocks is a close second. Maybe it was the energy and ambiance of the legendary amphitheater, or that a new album is rumored to be in the making, but the band chose songs and played like I haven’t seen them do since their Lateralus tour in 2001. They seemed poised and determined and delivered on every note, adding a little something extra to each song. Though they played a few standard tracks that always find their set list, experiencing Third Eye live for the first time was something I won’t forget, and it showed that after all these years they weren’t just going through the motions. 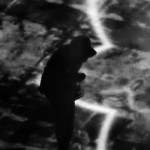