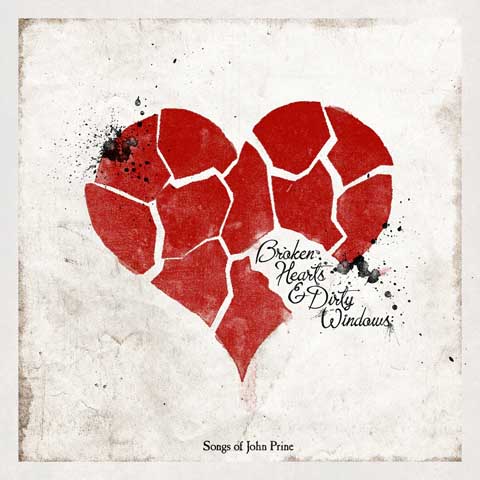 I love it when compilations go for the deep cuts. Nothing is worse than hearing a compilation whose track list reads like a “Best Of” release.

That said, however, I can’t believe no one did “Sam Stone” on this compilation of John Prine songs, Broken Hearts and Dirty Windows. I’m sure there are other fans of Prine who would miss other songs, and I guess that’s the only real downfall to this compilation.

Since his first, self-titled album was released in 1971, former Illinois letter carrier Prine has been simultaneously defining and defying the post-Dylan singer/songwriter movement from which he sprang. Bolder and stranger than the rest, yet beguilingly old-fashioned, Prine functions on his own timetable and by his own rules, going so far as to found his own label with longtime manager Al Bunetta, Oh Boy Records, thus liberating himself from the cat-and-mouse pressures of major label recording.

Broken Hearts & Dirty Windows was born in the Oh Boy offices, as a group of staffers at the five-person company were discussing their favorite artists and wondering how some of these newer acts would go about interpreting John Prine’s music. From there, inquiries began to be made.

In a brilliant move, the record company didn’t make any suggestions about the songs the artists,picked, nor how they should sound. But, most brilliant of all, they didn’t enforce a deadline, thus giving artists all the time they needed to make their tracks shine. However, that move did make this project take two-and-a-half years — and it was worth every second.

From the opening notes of “Music Arcade,” by Bon Iver’s Justin Vernon, it’s clear that Oh Boy carefully chose the artists on the album — most of whom are well known enough to keep it interesting, but just off the radar enough to keep it from being some slick commercial b.s.

Conor Oberst and the Mystic Valley Band do great justice to “Wedding Day in Funeralville” with a rocking flare. My Morning Jacket puts in one of the album’s best performances with “All The Best.” Jim James’ haunting vocals soar through the song, and the track ultimately sounds like something that could have been on the Jacket’s break-out album It Still Moves.

Josh Ritter, Lambchop and Justin Townes Earle each turn in strong renditions of some of Prine’s lesser-known tracks.

The Avett Brothers make “Spanish Pipedream” very much their own — their old-timey twang fits the track perfectly. Old Crow Medicine Show run splendidly through the sing-along ballad “Angel From Montgomery.”

Anyone who knows Prine’s work knows his vocal partner Iris Dement, and Sara Watkins of Nickle Creek pays homage to Dement’s style, in delivering the waltzing lullaby of “The Late John Garfield Blues.”

Drive-By Truckers, not shockingly, crank it up and tear through “Daddy’s Little Pumpkin,” before Deer Tick and Those Darlins close out the album with “Unwed Fathers” and “Let’s Talk Dirty in Hawaiian.”

This is a great homage to Prine, and one is sorely needed, but all in all, for this release to really shine it should have included even more artists, doing even more songs. Anything short of a boxed set on this, just kind of seems like an informal “Thanks,” instead of a hearty, humble “Thank you, sir.”