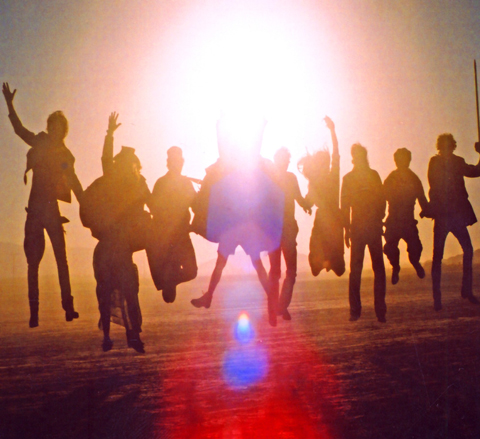 Charles Manson’s original career aspiration was to be a musician. But 41 years after Manson and his acid-head cronies started Helter Skelter, another group of California ideologists, known as Edward Sharpe and the Magnetic Zeros seem to have succeeded where Manson so miserably failed — being a happy and adored musical group.

This group wears the same hippie clothes as Manson and his followers, they have members who are also well versed in intoxicants, and they travel in such large numbers that calling them a cult isn’t much of a stretch. But where the band is really skilled is in converting followers. Their 2009 debut Up From Below features the instantly infectious track “Home,” which has been popping up in commercials and movie trailers with its cutesy lyrics, catchy chorus and ensemble folk rhythms. While the track was released last year, it’s proving to be the feel-good song of 2010, and not just to fans and critics but even for the band members themselves. “This is experience is so different because it was very genuine and creative and, you know, writing stuff that we love, and working on it because we love the song. I’m thrilled it’s doing what it’s doing, but we didn’t really think about it while it was happening. I just knew that it was special to me, you know?” said guitarist Christian Letts in a recent interview with The Marquee.

Edward Sharpe and the Magnetic Zeros is the brainchild of Alex Ebert (there is no actual Edward Sharpe in the band). Ebert, who formerly fronted the L.A. band Ima Robot, went through a well documented breakup with both a woman and substances at the same time. Ebert has said in interviews that he spent a year in a tiny apartment on a blow-up mattress, concocting the alter ego of Sharpe, who he said was “sent down to Earth to kinda heal and save mankind, but he kept getting distracted by girls and falling in love.”

Life mimicked this fiction when Ebert met the adorable dimples of the modern-day flower child Jade Castrinos, and began writing music with her. The two became part of the art and music collective The Masses, which was funded by the late Heath Ledger. Ebert and Castrinos continued to surround themselves with friends and before anyone knew it, Edward Sharpe and the Magnetic Zeros had blossomed into a 10-plus person ensemble. (The core touring band has 10 musicians in it, but their open-door policy to friends has allowed the band to swell to more than 15 people onstage some evenings).

“It was kind of like groups of old friends, that met with other groups of old friends,” Letts said. “We all kind of know each other through L.A., growing up, but we got to know each other through the recording; spending a lot of time together making dinner, drinking wine, and, you know, playing together. We’d finish dinner and go downstairs to the studio and record.”

While the vast majority of Up From Below was penned by Ebert, Letts said that there was definitely a communal feel when it came to recording the album, and he said that the next album is going to be a bit different. “The next album is going to be more of a collective writing experience, ’cause we’ve been writing on the road for the last year-and-a-half and collecting a lot of ideas so that we can get back in the studio soon,” he said, adding that may happen as soon as September, but that a location is still up in the air. “Who knows? Maybe we’ll go to Europe or something, or get lost in New Orleans, but I’m pretty sure we’ll keep that home-type feel. I don’t think a real pro studio is really us.”

Wherever they end up, though, Letts said that what’s really important to him, and his bandmates, is how they approach their music. He went on to tell his own story of awakening, explaining that he was in another band before the Zeros, which was “doing alright, and making good songs, but wasn’t coming from the purest place. I got caught up in listening to outside voices telling me what should be going on,” he said. Following a devastating breakup, a friend offered the confounding riddle of advice, “When you realize the gift in any situation, you can begin to heal.” Days later, he ‘solved’ the riddle by realizing he wanted to leave his musical mark in another way. “It was kind of one of those realizations, you know? The universe has a much bigger plan and I see that I had to go through those things to get to where I am now. And I wouldn’t change anything in my life. I’m really happy where I am right now.”

:: Edward Sharpe and the Magnetic Zeros ::