Trending Stories from The Marquee
You are at:Home»Album Reviews»John Mellencamp
By Marquee Magazine on August 1, 2010 Album Reviews, Jonathan Keller 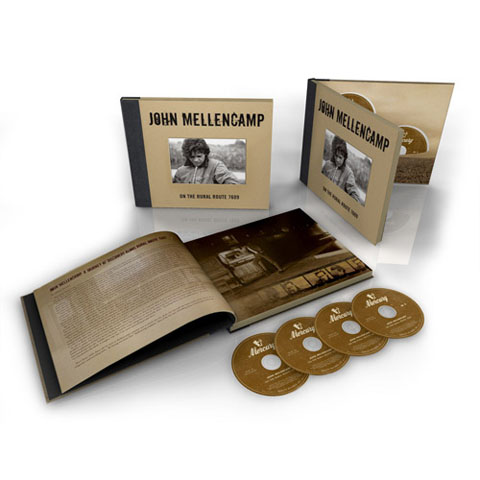 The gloriously packaged On the Rural Route 7609 is a long-overdue 4-CD boxed set that concentrates on John Mellencamp’s 35-year songwriting career. The set is perfectly packaged, well-compiled and does a magnificent job of showcasing Mellencamp’s songwriting chops, which have often been overlooked throughout his hit-laden career.

Some very smart decisions were made concerning this set and the first is the packaging. The boxed set is packaged within a book that most bands would dream of being able to release. The 75-page, hard-bound, glossy book, which houses the CDs in the back sleeve, features a 4,500 word essay by rock journalist Anthony DeCurtis and also features track-by-track commentary for all 54 tracks by Mellencamp. It’s one of the better boxed set packages I have seen and gives plenty of eye candy to flip through while listening.

The main reason this set works, however, is the selected music contained within. A conscious lack of attention was given to Mellencamp’s hits, which probably wasn’t an easy decision as Mellencamp has had a lot of them — 22 Top 40 hits in the United States alone. Most of his hits aren’t even presented on the set, and the tracks that did make the cut are featured in reworked or demo form. Demo versions include “Cherry Bomb,” “Authority Song,” and “Jack and Diane.” I must admit, it’s pretty damn cool to hear these songs with just an acoustic guitar and Mellencamp’s voice — an easy reminder that Mellencamp really is rooted in the folk tradition.

The set’s 54 tracks are broken out onto four discs and each disc is set up as an individual album with common themes rather than being presented in chronological order.  This format allows each disc to have great song flow, which is usually lacking on many chronological retrospectives.

The boxed set obviously leans heavily on obscure album cuts, outtakes and rarities. In all, 17 selections make their debut here.

Whatever your opinions of John Mellencamp may be, one must admit his career has seen him stay true to his Midwest roots and music. He is to the Midwest what Bruce Springsteen is to New Jersey. As Springsteen is often mentioned in the upper echelon of songwriters, Mellencamp seems to have always been overlooked, at least in my social circles. On the Rural Route 7609 should hopefully give him some long overdue credit.                    — Jonathan Keller