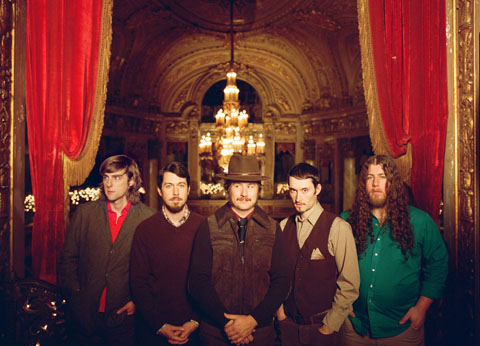 If all of the other groups playing the Mile High Music Festival banded together to make the most righteous rock and roll sound they could, it would most likely still pale in comparison to the power of My Morning Jacket.

That’s not to take away from the other bands at all. There are other acts on the lineup that are more famous; acts that are louder, have toured more, or been around longer than the Jacket. But the fact of the matter is that My Morning Jacket is completely unparalleled in today’s music world. The L.A. Weekly called them “the best live band in the world,” and Rolling Stone said that they “unleash more firepower than any band of their generation can match.”

One of the incredible things that plays in to that magic is the band’s unassuming demeanor, as individuals. They’re all polite and humble as can be, and they come off as almost painfully shy. But when the lights go down, whether they’re soaring through ballads, going on extended (but not jammy) adventures, or just rocking the hell out, there is a power behind the group which makes even the softest notes completely Earth-shattering.

“I wasn’t prepared for the magnitude of energy expended onstage,” said guitarist Carl Broemel in a recent interview with The Marquee. Broemel joined the band in 2004, at the same time that keyboardist Bo Koster joined the five piece, which includes drummer Patrick Hallahan, bassist Tom Blankenship, and band mastermind Jim James. “Bo and I had spent a lot of time rehearsing, but rehearsing is clearly different than playing a show. It’s almost pointless to rehearse, in a way. It’s not really pointless, but it’s almost funny to think of us rehearsing for the first time. Everybody was standing around looking at each other, hair in pony tails and then we get to Birmingham (the first gig) and it was just unleased. I remember looking at Bo and laughing like, ‘Jeez, what did we get ourselves into?’” said Broemel.

What Broemel and Koster had gotten themselves into was a rocket ship that was already going full-bore, but had yet to even kick on its booster engines. That came with 2005’s release Z, which was heavily praised by critics. The following year the band released a live two-disc set Okonokos, which featured live versions of eight of the 10 songs on Z, and showcased what Broemel was talking about when he mentioned the “magnitude of energy.”

In 2008, the band released their last studio album, the Grammy-nominated Evil Urges, and went on to be the darlings of the summer festival circuit, which included their fifth stop at Bonnaroo, where they played a nearly four-hour long, 35-song set.

Broemel said that the band is looking to get back into the studio soon for their followup to Evil Urges, but that they’re so early on in the album’s development that he can’t really talk about it. “We’re kind of in the middle of starting it, but it’s kind of embryonic, so I don’t want to talk about the music at all yet,” he said. “I will say that we’ll be in an undisclosed location and that it’s not a proper studio.”

He did explain that the album will most likely come out next year, but that the band is working on a “no-timeline timeline,” a luxury afforded them by their deal with ATO Records. “I think that they know that, left to our own devices, we’re gonna do what we do, which is make records and do our stuff. So, I don’t think they’re worried about it,” Broemel explained.

The Jacket has just returned from a year-long break from the road, but their “time off” wasn’t unproductive. James recorded an album and toured with his side project Monsters of Folk — which also features Conor Oberst, Mike Mogis and M.Ward — while also playing shows as Yim James and releasing Tribute To, a collection of George Harrison songs that he had recorded in 2001, following Harrison’s death.

“I feel like the break was good for everybody’s mental well-being and artistic well-being. It’s fun to do other stuff. But you know, it’s funny how much you start to work when you take time off. You start to work anyway on other stuff,” Broemel said — who during the downtime finished up a solo album, All Birds Say, that he had been working on since 2005. That album will be released on Aug. 31.

The time off also produced a brilliant idea for My Morning Jacket’s return to New York City in October of this year. The band is doing a five-night run of shows at Terminal 5, and as a special treat they will play one of their full-length albums in its entirety each night, along with covers from that era of the band. “It’s going to be like  a re-education for all of us,” Broemel said. “We need to get to work.”­