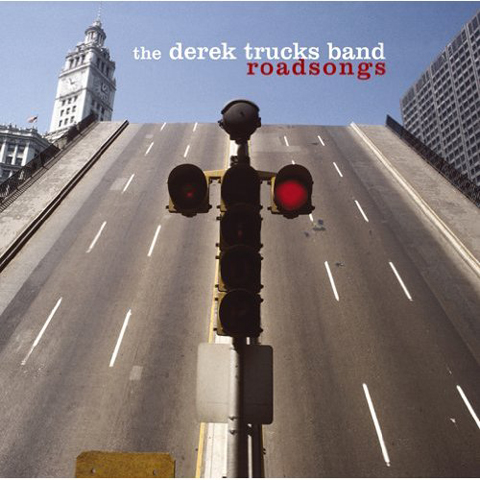 Some bands are better in the live experience than on studio efforts and The Derek Trucks Band is no exception. Led by the 31-year-old slide guitar master, Derek Trucks, the band has quietly become the elder statesmen for the blues-rock movement over the past 16 years — keeping blues tradition alive through aggressive touring while gracefully merging that blues with elements of jazz and rock. And for those of you not familiar with Trucks, who are trying to figure out that math, yes, Trucks, whose musical pedigree is as shining as stage lights, has been shredding for that long.

Currently on extended hiatus, The Derek Trucks Band’s latest live release, Roadsongs, is a proud reminder that on a good night the band can put on one of the best live shows, period.

Recorded in April, 2009 over a two-night stand at Chicago’s Park West, the double CD features the classic Derek Trucks Band lineup of Trucks (guitar), Kofi Burbridge (keyboards, flute), Todd Smallie (bass), Yonrico Scott (drums), Mike Mattison (lead vocal) and Count M’Butu (percussion). A highlight of this latest release is the presence of the stellar horn section made up of Paul Garrett (trumpet), Mace Hibbard (saxophone) and Kevin Hyde (trombone), who joined the band for the Chicago shows from which this live album was compiled. The result is the most exciting and well-crafted Derek Trucks Band live release to date.

The Derek Trucks Band has always been smart in their selection of cover songs. For a band that relies more on instrumental prowess and improvisation than on writing original material, cover songs have become a very exciting part of their live show and they have always tried to stay away from the obvious.

Roadsongs does a great job of documenting some newer cover choices for the first time on a Derek Trucks Band official release, including a scorching take on Allen Toussaint’s “Get Out My Life Woman,” and an awe-inspiring, 14-minute run through “Afro Blue,” a song popularized by John Coltrane.

“Afro Blue” is simply magnificent. Based on a funky, laid-back bass groove, the instrumental structure of the song allows the entire band to shine as they transition through various solos, including three staggered guitar solos from Trucks with flute, saxophone and keyboard solos sandwiched in between them. This one track alone would be a show highlight for most touring bands and is definitely a highpoint on the album.

The band also pays tribute to other artists as well, through an 11-minute take on Bob Marley’s “Rastaman Chant,” Bob Dylan’s “Down in the Flood,” Toots and the Maytals’ “Sailing On,” and their 9-minute Derek and the Dominoes closing tribute “Anyday,” which is another album highlight and features a scorching outtro solo by Trucks.

The few Trucks Band compositions on the album are also strong and include the album opener “I’ll Find My Way,” the shuffling “Already Free,” and the high energy romp “Get What You Deserve.”

For a group that got together because of a shared passion for improvisation and musical exploration, Roadsongs is a perfect summary of a band firing on all cylinders.

It’s a damn fine live album by any standard and a reminder that the live setting is where most good bands thrive.          — Jonathan Keller