Trending Stories from The Marquee
You are at:Home»Tid Bits»Drag The River – Free Daytrotter Studios Download
By Marquee Magazine on October 22, 2010 Tid Bits 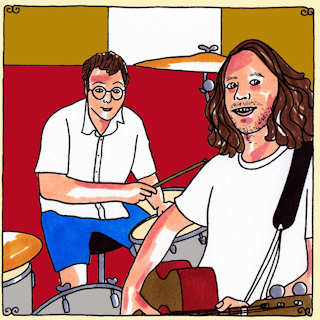 More than likely, Daytrotter is on your radar. They give away a free 4 or 5 song download from so many incredible artists from sessions recorded at the Daytrotter studios. Past sesssions (which are still up for free download) include artists such as William Elliott Whitmore, Kay Kay and His Weathered Underground, Chuck Ragan, Justin Townes Earle, Local Natives, and on and on. All you have to do is have a login to download the tracks.

If you’ve purchased “2010 Demons” by Drag the River, these songs will be familiar to you, but even if you have the songs, these sessions are really great and offer a different side of those songs. The session turned out really really great and these new songs could be some of my favorite Drag the River songs.

If you are looking to nerd out a bit more than normal on one of the songs, I challenge you to figure out the age of Jon (or the protagonist around the song) in “History With History”. There are two sets of clues that suggest the age of this person. Feel free to share your answers on the comments.

Rumor has it that the band has discussed releasing the sessions on vinyl, but no official decision has been announced.