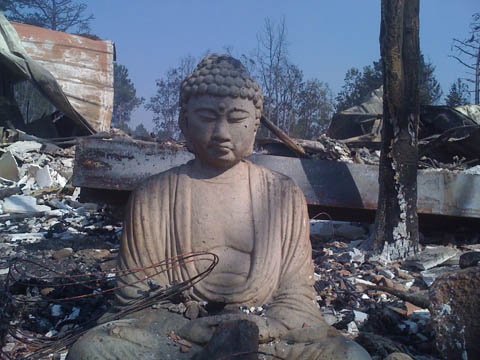 On September 6, 2010, as most of the Front Range was enjoying Labor Day and traditional end of summer barbecues, the residents of Fourmile Canyon west of Boulder were fleeing their homes as a raging wild fire that had flared up in their midst devoured the bone dry tinder that literally covers  much of the ground in those hills.  It was the beginning of one of the most destructive natural disasters in the history of Colorado and it forced thousands of people from their homes, some for a week or two, some forever.

After the smoke cleared, and residents began to take tally of what was lost and what was saved, promoter AEG Live announced one of the biggest shows in recent years would be held on October 9 at Broomfield’s First Bank Center, to benefit victims of the fire. It wasn’t exactly like they had announced a couple local up and comers playing for a good cause — this show listed a lineup that included Yonder Mountain String Band, String Cheese Incident, Leftover Salmon, Big Head Todd and the Monsters and, the coup de gras, the members of Phish, who start their fall tour the following night at the same venue.

The Marquee caught up with Jeff Austin of Yonder Mountain String Band and Brian Nevin of Big Head Todd and the Monsters to talk about the fire and the Fourmile Canyon Revival Benefit, as it is being called. Both men live in the hills west of Boulder and while Nevin and his wife were evacuated, Austin was fortunate enough to be able to remain in his home south of Nederland.

“I was on my way to Gold Hill because every Labor Day they have a bunch of music there and it was a bunch of Zydeco bands this year and I’m a big fan of Zydeco music,” Austin said as he described where he was when he first heard about the fire.  “I was headed there for some Jambalaya and catfish and to watch some music. I got a call from our monitor engineer and he said ‘Hey, you see all this madness going on?’  I said ‘what are you talking about,’ and he went on to tell me about the fire. The way my house is positioned up here you couldn’t see smoke or fire or anything.”

Though the devastation would have been much, much worse if not for the heroic efforts of countless firemen, volunteers, pilots and others who responded, the blaze went on to jump ridge lines, engulf school busses, fire trucks and more than 160 homes. By the time it was contained the fire was deemed to be the most destructive in Colorado history in terms of the number of structures it destroyed and the total damage estimates.

Despite all the property damage, one thing that everyone can celebrate is that the fire did not claim a single human life. That fact is truly a blessing as stories filter down from the hills of firemen being trapped in canyons with fire leaping from tree top to tree top over their heads and an evacuee who flirted with death as he ran from a wall of flames that claimed his home seconds after he left for the last time. “I just drove through a wall of flames. The bumper is melted off in the front of the van,” Tom Neur told Fox 31.  “I didn’t think you were coming back. I thought you were gone because it was so bad,” his wife Anna said as she choked back sobs.

“All of us that live up there think about it every year.  Our conversation with neighbors is ‘How dry is it? How do things look?’ because we know that we live in a bunch of kindling at times in Colorado,” Nevin said.  “You mitigate the best you can, have a plan for evacuation and good insurance.  It’s been bone dry for the second half of the summer and we are just crossing our fingers that we get into the winter.”

As the heat of summer starts to fade, and with it some of the fire danger, some of the biggest and most popular bands Boulder County has produced will unite to support those from their own community who are in dire need.

“We’ve played with all these bands in different places across the country but this will be the first time that all four of us, the big Boulder bands, have played together in Colorado,” said Nevin.  “It should be a pretty casual night so I’d imagine that you’ll see a bunch of people jumping in and jamming with each other. Because of the kind of event it is, a community event, it is setup to be that way musically also and I’m looking forward to seeing all those guys play.”

Despite the unprecedented line-up and the possibility for once in a lifetime collaborations, both Austin and Nevin were adamant that this event is not about the musicians, and it’s important to keep the focus on the true goal of the evening. “This event is about making a buttload of money for people who need it,” Austin said. “I just want people who come to the event just to ‘be’ in the moment and give as much as they can. If you have a 100 bucks and the ticket is only 60 then give an extra 40.”

Both musicians passed on some poignant messages to those most seriously affected by the fire.  Austin waxed philosophical and said “There is always hope, I’ve learned it in my life when things are the absolute darkest.  No matter how dark it gets there will be somebody there who will hold their hand out, give it to you and walk along with you.  It’s in those times when you need to reach out and take that help that is offered.” He then went on to describe one image that summed up the whole event in his eyes. “There is an amazing photograph on the Gold Hill Town site of this house that has been reduced to ash and right in the middle of this foundation of this house is this huge stone Buddha just sitting there. You hope that the statue wasn’t just a decoration in somebody’s house and you hope that when they walked up and saw that figure that there was that little bit of hope. Even in the middle of the blaze and raging disaster there is a stillness and a clam that you can find that will bring you back to your center.”

Nevin said simply “My heart goes out to you. It’s the greatest fear for all of us who live in the foothills outside of Boulder and I’m sorry that you have to deal with it. We are here to do anything we can to help. You are in our thoughts and prayers.”

While this one evening of music won’t heal the spirits of those who lost everything or repair the damage that the fire did, it is sure to go a long way to focus our collective consciousness in the right direction and allow the Front Range community to pull together to support those who need it most.

All proceeds from the concert will go directly to the Boulder Mountain Fire Relief Fund.  The Fund supports the local volunteer fire departments that courageously fought the recent fire and the mountain residents whose lives were directly impacted by this disaster and are in critical need of financial support.