The Alchemist and the Oh No Sawblade EP 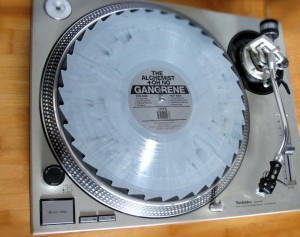 It’s one of the coolest pieces of vinyl in recent years. A silver slab that’s cut to look like a saw blade.

But, no one ever told the band, to back up the album’s awesomeness with good tracks. Yesterday, the band released a new video for their track “The Sickness,” which appears on the album. The video was directed by Jason Goldwatch, and the publicist for the group dared people to “watch the whole thing without cringing.”

The campy, gross, b-movie footage didn’t make me cringe once. It kind of made me just not care. But what did make me cringe was the simply terrible “rapping.” Just a tip guys, you may want, from time-to-time to try to have some type of flow.

Think I’m being a dick? See for yourself here: