Trending Stories from The Marquee
You are at:Home»Cover Story»Clutch
By Marquee Magazine on November 1, 2010 Cover Story, Features, Interviews, Joe Kovack

Clutch slips into second decade together, and gets comfortable as label owners 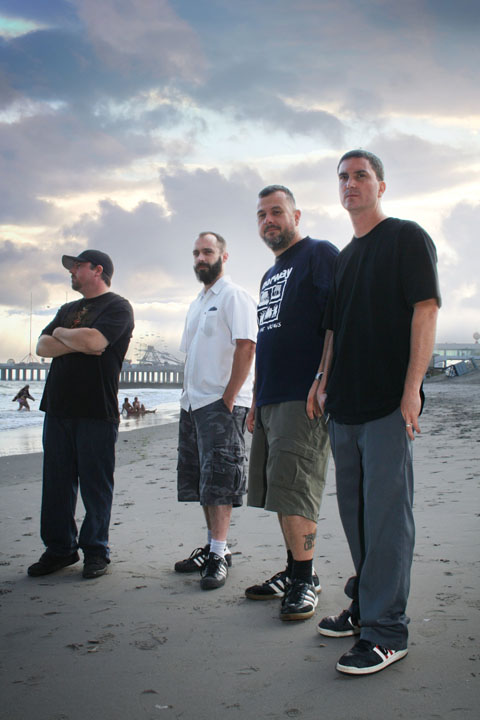 When a band reaches 20 years in the business it often times may slow down in terms of music production and relentless touring. Clutch must not have gotten that memo.

They just don’t stop touring or creating new music. Still pushing out around 100 tour dates a year, Clutch exudes the type of youthful exuberance generally reserved for young up-and-comers. The group even decided it was time to take the reins and start their own music/recording company, Weathermaker Music. They personify the epitome of what a proactive band should be, never staying complacent and constantly reinventing themselves.

Formed in 1990 in Germantown, Maryland, Clutch is a driving force in American hard rock. Gritty with funk and blues intertwined, they have a sound that has varied throughout their career. In the early days, the band put forth a sludgy almost heavy metal presence, with gravelly vocals and fast paced riffs that could summon the beast within — perfect for the wild mosh pits of yore. But as does happen with the passing of time, the band evolved their sound, incorporating the styles of funk, blues and jam into their already blistering hard rock identity.

In a recent interview with The Marquee, lead singer Neil Fallon described the natural progression of their sound. “Our deepest influences came when we were young, listening to classic rock. Later on, we got into punk rock and metal, and then as you get older, as we did, we really listened to anything and everything,” Fallon said. “All of those things played a part in the sound. But we never ever talked about what the band was supposed to sound like. And I think that was a very fortunate thing because it kinda became its own. It was never engineered. And we still don’t talk about it. I think music should be impulsive. If you calculate it, the sound, you can tell it from a mile away. It’s insincere,” Fallon said.

Fallon attributes a lot of the band’s evolution to going back to the blues, the roots of rock and roll, for inspiration. “You have the blues as the starting point, then you have the first generation of rockers like Rolling Stones and Led Zeppelin and they were all listening to Howling Wolf. And then bands copied those bands, and bands copied those bands. And it’s almost like a VHS tape when you make generation after generation, the picture starts to get blurry. So I find it pretty inspiring to go back to listen to the fountainhead of rock and roll. It worked for those first generation of rock bands and it still does. It’s just as relevant today as it was then in the ’60s,” Fallon said.

Spend 20 years in any business and you will eventually get screwed in some manner. But sometimes it may be a blessing in disguise. After their last record label stopped paying them, and an ensuing lawsuit for the rights to their albums was eventually won, the guys decided it was time to go DIY. Starting Weathermaker Music in 2008, the band has been reissuing previously out-of-print albums along with a new DVD that includes a live performance of the band at the Sounds of the Underground festival in 2005. Currently, the label only represents Clutch and the band’s jamband side project The Bakerton Group, but the decision to start their own label was significant.

“Philosophically, if you can start your own label, why wouldn’t you? I mean, why would you include more people in the business process when you don’t have to? You’re just giving away your money,” Fallon said. “Our last label was so terrible it was like not having a label anyway, so we decided to venture out on our own. We figured we could do a better job, and I think we are. The internet bridges the gap between listener and musician, and we’re pretty lucky to be living in a day and age where we can do that,” Fallon said.

Having always been a touring band, the rise of the digital age of music doesn’t worry the long-time rockers. Never really relying on record sales, they earned their bread and butter the old fashioned way: by touring their asses off and loving every minute of it. “In our world, not much has changed. We’ve always been a touring band. So as far as the bottom falling out under the music industry, it’s really neither here nor there to us. It’s actually probably a blessing in disguise. Touring — I think that’s what bands are supposed to do. Records, videos and radio are all brand new technology. Live music has been around for tens of thousands of years. We enjoy playing music. And I think that should always be priority number one. It’s the best job in the world. We never went out seeking fame and fortune. All we ever wanted to do was make a living playing music. To me, that’s all you can really ask for and if you got that, don’t look a gift horse in the mouth,” Fallon said.