Trending Stories from The Marquee
You are at:Home»Album Reviews»Fox Street All stars
By Marquee Magazine on November 1, 2010 Album Reviews, Timothy Dwenger 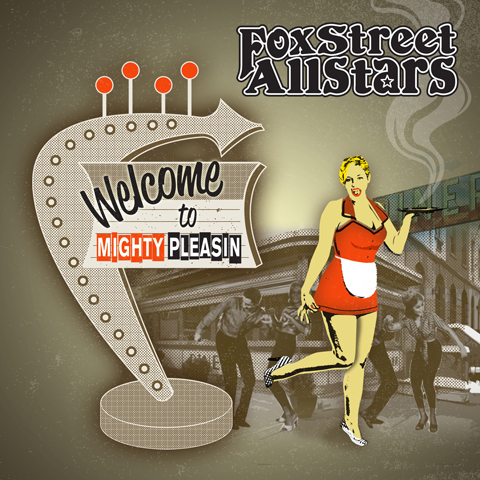 After three years of playing together along the Front Range, Denver’s own Fox Street All Stars are releasing their debut album this month and they are coming out of the gates with guns blazing.

Welcome To Mighty Pleasin’ plunges the listener right into the sweet spot of the Fox Street sound as “Do Me On The Floor” opens with crunchy rhythm and howling slide guitar layered on top of the band’s rock solid rhythm section. That backdrop, coupled with lead vocalist Jonathan “Skippy” Huvard’s soulful, whiskey soaked vocals produces a sound that could have been seeping out of roadhouses of the South in the early ’70s.

While the album primarily focuses on original songs the band has refined through countless live performances, they have dropped two well chosen covers into the mix as well.

While more than half of the album features the hard driving songs the All Stars have become known for, stepping out of the bars and into the recording studio gave them the opportunity to show off their depth as musicians. On the standout ballad “Angel Wings,” Huvard and the rest of the All Stars seem to channel The Black Crowes as they pour their souls into every note, while the slow blues of the album’s closer “Til My Daze Is Gone” gives lead guitarist James Dumm, keyboardist Bill McKay (Leftover Salmon) and guest sax player Nathan Peoples a blank canvas to decorate with some choice solos.

Whether your bag is funk, blues, soul or rock and roll, Welcome To Mighty Pleasin’ is guaranteed to take you on a musical ride that will have you hanging on for dear life. It’s an impressive piece of work and it sets a high bar for the future.