Trending Stories from The Marquee
You are at:Home»Album Reviews»Bob Dylan
By Marquee Magazine on December 1, 2010 Album Reviews, Jonathan Keller 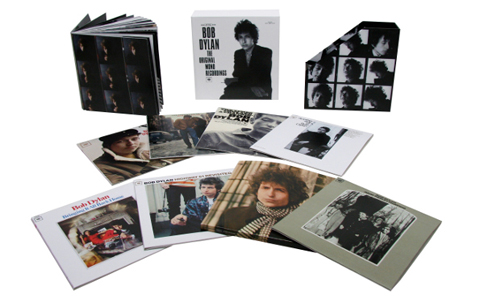 Riding on the heels of the highly successful 2009 boxed set The Beatles in Mono by Columbia/Legacy Recordings, which compiled the LP mono records by The Beatles, The Original Mono Recordings finally brings Bob Dylan’s first eight studio records to the digital format in their true mono state. The boxed set sounds utterly amazing, is gloriously packaged and would be a welcome addition to any Dylan fanatic’s collection.

There is no doubt that Dylan was at his creative peak and most prolific during the six-year span from the release of his first album in 1962 until 1967. Dylan released his first eight albums during this time and expanded the parameters of what a songwriter could and should be in the process. The albums featured in The Original Mono Recordings include The Freewheelin’ Bob Dylan, The Times They Are a-Changin’, Another Side of Bob Dylan, Bringing it all Back Home, Highway 61 Revisited, Blonde on Blonde and John Wesley Harding. These albums are featured on nine compact discs (Blonde on Blonde is issued on two discs in its original vinyl format) and each respective album is housed in a heavy, wrapped LP-replica jacket with full reproductions of the original inner sleeves and inserts. The set also comes with a 60-page full color booklet highlighting this period in Dylan’s career.

For those not used to listening to mono recordings, this boxed set provides something to behold. The remastering is phenomenally crystal clear and each track pops out of your speakers with pristine instrument separation and greater force than Dylan’s stereo mix counterparts. These mono recordings sound more powerful and fuller and should be given full auditory attention.

It’s about damn time these mono recordings were finally released.