Trending Stories from The Marquee
You are at:Home»Album Reviews»Jimi Hendrix
By Marquee Magazine on December 1, 2010 Album Reviews, Jonathan Keller 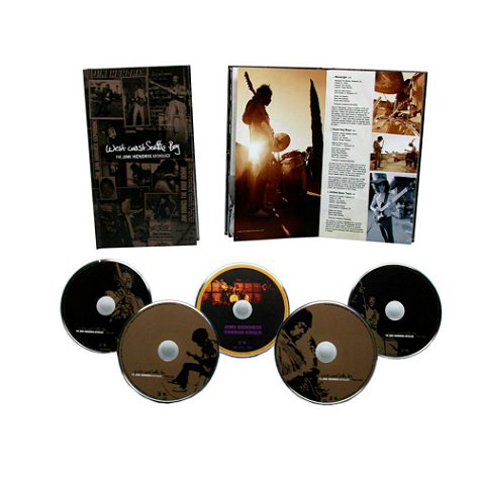 When Legacy Recordings teamed up with Experience Hendrix LLC, the managing group of Jimi Hendrix’s recorded catalogue, it was clear that Hendrix’s discography was finally going to get the rock star treatment it deserved. Legacy has been active with the catalogue in 2010, reissuing five Hendrix albums in 2-disc CD/DVD deluxe editions and also releasing the standalone disc Valleys of Neptune, which features 12 previously unreleased studio recordings. Legacy’s newest project, West Coast Seattle Boy: The Jimi Hendrix Anthology, is a fantastic 4-CD/1-DVD boxed set that tracks Hendrix’s journey from a little known R&B sideman to international stardom through an unprecedented assemblage of previously unavailable recordings.

Make no mistake, this boxed set is not a collection of existing Hendrix albums — rather, a collection of 45 unreleased live and studio recordings which include studio demos and alternate versions of songs culled from Are You Experienced, Axis: Bold as Love and Electric Ladyland. The set also includes some never-before-heard home demos including Bob Dylan’s “Tears of Rage,” “Angel,” “Long Hot Summer Night” and “1983 (A Merman I Shall Turn to Be).”

The first disc of the set focuses on Hendrix’s work as a recording sideman, featuring 15 tracks by other artists including The Isley Brothers, Rosa Lee Brooks, Ray Sharpe, and King Curtis. Hendrix plays a backup role on these tracks and the occasional 10-second guitar solo might make these interesting to some, but for the most part this disc is pretty tame. It’s nice to have these tracks finally compiled but the bulk of the goods in this boxed set are on the other discs, which focus on Hendrix’s solo career.