Trending Stories from The Marquee
You are at:Home»Album Reviews»Slayer
By Marquee Magazine on December 1, 2010 Album Reviews, Brandon Daviet 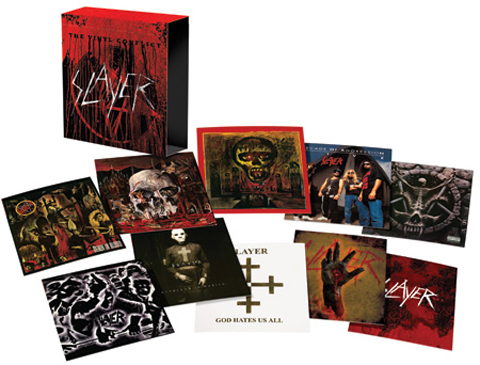 There is no reason that the new Slayer vinyl set shouldn’t be under your tree this season. I can only drool (and perhaps be slightly aroused) at this marvelous stack of records.

The set contains every album Slayer has forged from 1986’s genre defining Reign in Blood to their last brilliant record World Painted Blood. The albums are pressed on top shelf 180-gram vinyl and the packaging is reproduced with care for not only the visualist but also for the audiophile who wants these records to last longer than the damnation some say you’ll get for listening to Slayer in the first place.

If there is a sin to be found here it’s the fact that because of lovely ownership rights, legalities and such, pre-Reign in Blood classics like Live Undead and Hell Awaits aren’t included. That’s forgivable, though, and in the end, The Vinyl Conflict is a carnal delight for both the eyes and the ears if you’re a Slayer fan or an uninitiated turntable owner.                      — Brandon Daviet