Trending Stories from The Marquee
You are at:Home»Album Reviews»Phish
By Marquee Magazine on January 1, 2011 Album Reviews, Jonathan Keller 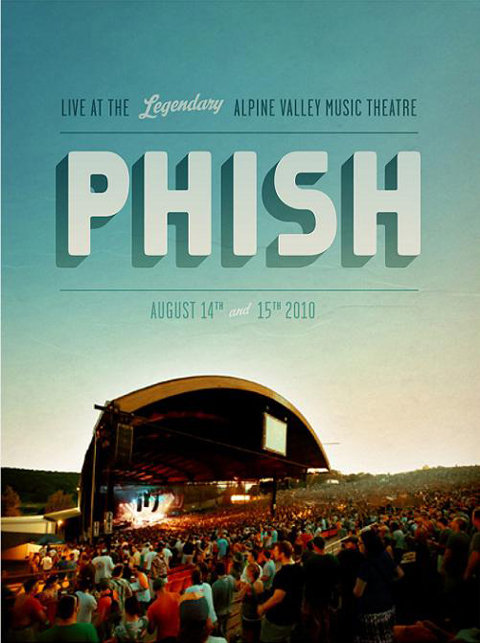 It’s pretty hard to believe that Alpine Valley 2010 is the first time Phish has recorded and released a concert DVD in the same calendar year. For a band that has typically drawn heavily on archive concert DVD releases, Alpine Valley 2010 is blast of fresh, recently recorded music that will hopefully lay the groundwork for future concert films that are released in a more timely fashion.

The 2-DVD, 2-CD live boxed set was recorded and filmed over two shows at Alpine Valley Music Theater in East Troy, Wisc. on Phish’s 2010 summer tour. The DVD concert footage is fantastic — it features the 8/14/10 show in its entirety and also includes nine complete songs from the 8/15/10 show as bonus footage.

The film footage is well edited, giving all four Phish members ample screen-time — and it is obviously edited by someone who is familiar with the band’s music, as key musical figures are wonderfully highlighted throughout. The sound quality on the DVDs is well-mixed and crystal clear, although at times it can be a bit muddy in the lower end. In all, Phish plows through 33 songs total, many of which have never been documented on a film release before, including  “Tube,” “Fuck Your Face,” “The Sloth,” “Theme From the Bottom,” “What’s The Use?,” and “Sneakin’ Sally Through the Alley.” The DVD set is a no-frills concert release, featuring no interviews or backstage banter — which is a welcomed treat, as they packed as much concert footage as they could into the set.

The only major complaint regarding the concert footage is the lack of a Blu-ray release. Phish has been recording every show in 2010 with multiple HD video cameras, yet have chosen to release Alpine Valley 2010 only in DVD format. The video footage looks fine on  standard non-widescreen TVs, however it does look grainy and less clear on most HD televisions.    Another complaint is, why were the Alpine Valley shows chosen for this release to begin with? These shows definitely had some highlights, such as the 8/14 24-minute monster segue “Down with Disease” > “What’s the Use?,” but one could make the argument that these Alpine shows that were not the best of the 2010 summer tour.

Personally, I can immediately think of a few other shows that I would have preferred released, including 6/27/10 – Columbia, Md.; 7/4/10 – Alpharetta, Ga.; and 8/6/10 – Berkeley, Calif. Perhaps a compiled concert film featuring the best moments of the entire 2010 summer tour would have better highlighted Phish’s playing and growth since the reunion.

The accompanying 2-CD set, which documents the entire 8/14/10 show, is an unnecessary addition. Strangely, “Taste” was omitted as an obvious space saver and most Phish fans probably already own these downloads via LivePhish downloads.