Trending Stories from The Marquee
You are at:Home»Features»Thirty Seconds To Mars @Fillmore 1/21/11
By Marquee Magazine on January 25, 2011 Features, Kayla Bellipanni, Live Reviews 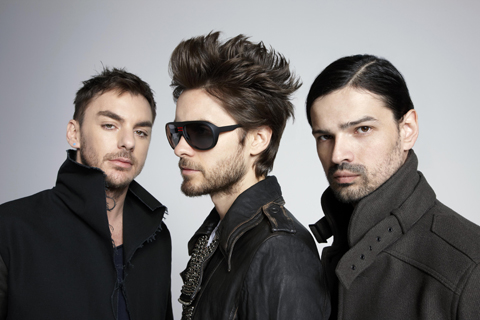 It started quietly like most great and powerful things do.  The lights went dark and the audience stared transfixed at the stage.  The threesome walked out dressed in their ridiculously put together “yuppie-preppie” costumes (Every band needs a theme night) to a deafening roar that eventually faded back into the blackness of the stage. When Thirty Seconds to Mars started to play their first song, Escape, the crowd stayed quiet and stared as if in a hypnotic trance. About a minute into the song, the lights flashed on. As if this were a sign of permission granted by a higher power, the crowd went crazy. There is a reason this show sold out.

Thirty Seconds to Mars put out a great energy that few bands are able to accomplish. They reached the crowd with an intense power the fans were more than happy to absorb and reciprocate. Whatever energy the band threw out at them, they threw back ten times more powerful. The walls of the venue shook as if barely able to contain the super-charged force between the fans and the band. Then a man standing next to me said, “This is amazing. It’s like you can see the music!”

He was right. It was faint and if you looked away from the stage for just a second, you’d lose it- but sure enough the music seemed to flow from the stage to the crowd in cartoonish lines and wrapped around the audience members. It enveloped them, evoking primal behaviors such as tearing off clothes and throwing them onstage (Hey, who doesn’t like to have a sweaty bra thrown at them? Who doesn’t like to throw their sweaty bra?), flashing, fighting, and war cries. Between each song was a longer-than-usual pause that only helped elevating the crowd’s anticipation and winding them up for more.

The energy and passion only increased as the show went on, climaxing when lead singer, Jared Leto, invited a large collection of the crowd to join him onstage and help sing the final song Kings and Queens.  With about fifty fans standing on stage or on someone else’s shoulders, the Fillmore rang with the sound of unamplified voices chanting the chorus.

Thirty Seconds to Mars put on one of the best shows I’ve ever seen in Denver.  It’s rare that a band reaches their entire audience on such a level. The energy was unparalleled and the stage presence unrivaled.  This show proved that Thirty Seconds to Mars has well earned their multi-platinum status- not that they have to prove themselves to anyone.