Trending Stories from The Marquee
You are at:Home»Album Reviews»Drive-By Truckers
By Marquee Magazine on February 1, 2011 Album Reviews, Brian F. Johnson 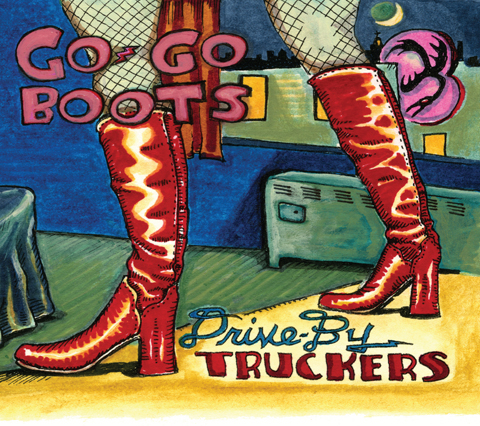 A follow-up to last year’s The Big To-Do, featuring songs that were actually recorded during the same sessions, Drive-By Trucker’s eleventh album Go-Go Boots sees the band continuing to get personal, with songs about life and love.

That’s fine, but when it comes down to it, Drive-By Truckers are much better historians than they are autobiographers.

As I said last year, when they released The Big To-Do, the album was “fine,” but it lacked the beer-cans-to-the-ceiling sing-alongs that the Truckers became known for after the release of their epic 2001 double-disc Southern Rock Opera. Go-Go Boots follows suit here with some great songs, but few knock-out rockers.

DBT co-founder Patterson Hood said in a press release about the album, “Go-Go Boots is what I sometimes (semi-jokingly) refer to as our country, soul and murder ballad album.”

That’s all well and good. The Truckers have had lots of those types of songs over their career, but in the past they were peppered throughout their albums, instead of being the main theme. But, while I struggle to figure out where the rock has gone, it’s undeniable that some of these songs are great pieces of music.

Take, for example, “Everybody Needs Love.” The Patterson Hood-penned track sounds remarkably like an early Bruce Springsteen song. Hood has always had a Springsteen-eqsue approach to his songwriting and performance style and this song may be the pinnacle of that influence. It’s soft and poignant, much like Hood’s 2006 album closer “World of Hurt,” from A Blessing And A Curse. That song closes with the repeating line, “It’s going to be a world of hurt.” Not surprisingly, “Everybody Needs Love” closes with the repeating line, “Everybody needs love, love love.” And while those two phrases might initially sound counter-intuitive to one another, it’s ironic that they are, in fact, saying the same exact thing, in meaning. It’s easily the best song on the album.

But bassist Shonna Tucker is really starting to give Hood a run for his money in the songwriting department. Now remember, this album was put together from the same set of recordings as The Big To-Do, where Tucker kind of broke out of her shell. So we’re not seeing big differences between songs — many have the same feel. Tucker’s tracks, in particular, almost sound as if they all come from their own album. Her soaring choruses on “Dancin’ Ricky” and “Where’s Eddie” are phenomenal and beg the question, ‘When will she release a solo album?’

“The Stroker Ace,” guitarist Mike Cooley, turns in precious few songs on Go-Go Boots, but when The Marquee spoke with Cooley last year, he admitted that he hadn’t contributed as much songwriting to the sessions, since he had just had another child, and for the second time in his life, found himself with a newborn and a two-year-old in the house at the same time.

Hood wrote that this album “finally fully embraces the music of our original hometown area of Muscle Shoals,” and in that aspect the Truckers have indeed succeeded. That said, I really hope that their next album returns more to the rock anthems put forth on Southern Rock Opera — or at minimum, for the rumors to come true about the Truckers doing performances of SRO in honor of the 10th anniversary of that release, which is this year.                      — Brian F. Johnson