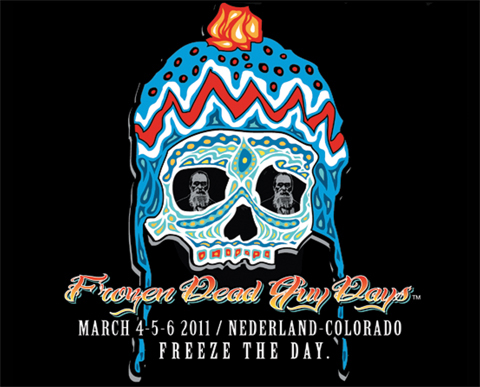 The hippie burg of Nederland is not only known for its quirkiness, it down-right celebrates it. And no other celebration is more “Ned” than the annual Frozen Dead Guy Days festival — which pays homage to Bredo Morstol, whose remains have been frozen in dry ice in a Tuff Shed in Nederland since 1993.

While a big part of the festivities centers around coffin races and other things related to either death or being cold, like the Polar Plunge, the frozen salmon toss, or the parade of hearses, the festival has been growing its musical base over the last several years and this year, the event will feature 20 musical acts on two stages.

Here are our picks for some of the best.

From deep within the tangled foothills of Boulder, Colorado, these grizzled Americana outlaws sing their stories like an old country song, but keep things unconventional with heavy influences in folk, rock, and traditional roots styles. Complete with harmonica, strings, drums and vocals, The Longest Day of the Year will start out Frozen Dead Guy Days with a raised glass and something for those frozen bones to stomp to.

:: The Reanimate Yourself Tent ::

Originating from the New York funk rock scene in the late ’80s – early ’90s, and a staple in the Nederland scene since the mid-’90s, ace guitarist Jon Ridnell has released a slew of albums with his full band. And while this scaled down Trio set will feature a few less players, it will not in any way lessen the experience. Nederlanders are picky about their music, and Ridnell is one of the most respected players in town, so he’s already earned the seal of approval to open Saturday’s music.

Leftover Salmon’s very own original accordion players Joe Jogerst and Gerry Cavagnaro have joined forces with members of Zukes of Zydeco to create this “high energy zyde-cajun slam jam” known as The Zydecoasters. The driving melody of accordions paired with the complimentary strings, occasional woodwind/brass, and syncopated rhythm creates quite the hootenanny feel.

Since 2009, these homegrown heavy hitters have kept their sets full of energy, chunky beats, and danceable grooves. Ground Up has a distinct jam band rock style that weaves through the fields of funk and alleyways of improvisation seamlessly. This is music to dance to, sing to, drink to, and push coffins down a hill to.

Nederland’s very own Fat Rabbit is a six-piece electric fusion band with a unique take on jazz and improvisational rock. The large furry creature samples veggies and herbs (mostly herbs) from gardens called Coltrane, Zappa, The Beatles, Miles, Traffic, and others — as it scampers the hills following the scent of ’50s, ’60s and ’70s musical exploration. These talented gentlemen deliver a highly refined, energetic concoction that samples some of Nederland’s most beloved genres.

ONDA (Spanish for “vibe”) is a nine-piece Latin dance band that has made a name for itself as one of the best dance bands in the scene. Founded in 2000, its music is a wonderful mix of originals, traditional Latin standards and rhythms blended with funk, Latin jazz, cumbia, boogaloo, merengue and modern jam arrangements. ONDA’s eclectic arrangement of tasteful beats and rhythms is bound to create a relationship between audience and band.

The Mile Markers play “music for the new depression.” In a time of economic crisis when people are surrounded by all types of loss and fears, The Mile Markers take a minute to remind us that tomorrow is a new day. With the recent release of their new album Take to the Road, The Mile Markers continue to broaden their roots deeply burrowed in Americana and old time folk, using an expressive acoustic style that’s undoubtedly charming and authentic.

With a name that is remarkably similar to the Ned band, Elephant Revival, who just released their sophomore album Break In The Clouds, “Elegant Survival” (wink, wink, nudge, nudge) is emerging with a neo-acoustic style, and the creation of a new cutting edge genre known as “transcendental folk.” In addition to having a similar name, the individual members appear to be exact twins of the players in Elephant Revival. Members of this pachyderm-adoring, highly respected quintet will mix with a slew of special guests for this rich, afternoon set.

Singer/songwriter and classically trained musician extraordinaire Kort McCumber keeps things fresh and lively by merging country, folk, americana, blues, bluegrass, rock, and roots. Four albums deep, McCumber has been able to evolve through all his favorite genres and come full circle with his latest release Ain’t the Same as Before, which a No Depression writer said should have been named as the Americana album of 2009.

Silas Herman and Colin Huff, the sons of Leftover Salmon’s Vince Herman, are not just surrounded by musicians, but completely immersed in music to the point that it is no surprise that they would play themselves. What has been surprising, however, is the level of craftsmanship that they’ve brought to their playing, despite their relatively young ages. They will be joined by Nederland’s Dustin Greer and Mountain Standard Time’s Nick Dunbar for this set.

The Whiskey Bottles, based out of Boulder, Colorado, does a crack job of covering

Americana/alt-country tunes from artists such as Lucinda Williams, Neil Young, Emmylou Harris, John Prine, Lyle Lovett, and more. Not, surprisingly, their original tunes follow along the tradition of the covers — with the emphasis on intimate songwriting with catchy hooks, sparkling melody, rich harmonies, and contagious rhythms.”