Trending Stories from The Marquee
You are at:Home»Features»Steel Panther @ Bluebird Theatre
By Marquee Magazine on March 20, 2011 Features 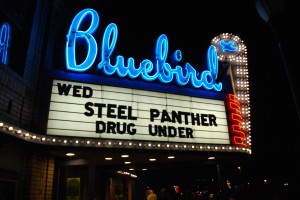 Subtle they are not.  With song titles like:  ‘I Want Pussy’, ‘Eatin’ Ain’t Cheatin’, ‘Big Boobs’, and ‘Party All Day (F*ck All Night), Steel Panther reminds us that Sex, Drugs, & Rock ‘N’ Roll are still alive and well.

Half Rock show and half comedy routine, Steel Panther brought their act to the intimate Bluebird Theatre in Denver, CO on Wednesday night.  Local Denver boys Drug Under opened up the proceedings.  I keep thinking Drug Under is one step from joining the ranks of the big boys.  (Speaking of big boys, Ivan from Five Finger Death Punch was in attendance).

The crowd was all fired up.  Outfitted in wigs, spandex, sunglasses, bandanas, mini-skirts, and all the rocker regalia, it was definitely ‘80s Hair Metal night.

Steel Panther got through all of two songs before they started with the heckling.  They told all us guys they were going to fuck our girlfriends.  They picked on one guy in the front row with a smokin’ hot girl and told him that he was like dial-up and his woman was like DSL.  They ran through every dick joke in the book.  And the audience ate it up.

Highlights of the show included the song ‘Asian Hooker’.  ‘Asian Hooker’ is a fantastic song musically, and I love the oriental keyboard accents.  The lyrics are hilarious – totally juvenile in a good way.  And, of course, Steel Panther’s anthem – ‘Death To All But Metal’!  ( No, it’s not death to all BUTT METAL).  The song rips on familiar pop music icons (hacks) such as Kanye West (a less talented artist this writer cannot name) while praising Metal superstars Def Leppard and Motley Crue.  The song features shredding guitar, vocal wailings and screamings, and even a Metallica lick from ‘Seek And Destroy’ in the middle.  Vintage ‘80s Metal.  Do yourself a favor and youtube the video for this song.

Steel Panther is comprised of some talented mofos:  On vocals is Michael Starr.  He played with the Van Halen cover band, Atomic Punks, and also did a short stint with LA Guns.  On guitar, Satchel (Russ Parrish).  Parrish has been all over the place.  He was an instructor at the Guitar Institute of Technology (GIT), a member of War & Peace – Jeff Pilson’s (Dokken) band, a member of Rob Halford’s (Judas Priest) oft overlooked but amazing band Fight, and also has his own band called The Thornbirds with Jeff Duncan (Armored Saint).   Rounding out the band are Lexxi Foxxx on bass, and Stix Zadinia, who also plays in The Thornbirds, on drums.

And the list of special guests that join the band on their albums is quite impressive: M. Shadows (Avenged Sevenfold), Scott Ian (Anthrax), and Corey Taylor (Slipknot).

I fully endorse what Steel Panther stands for. They are real. They are in your face. They tape some C-4 explosives to ‘political correctness’ and blow it to smithereens. They cut through the bullshit. They take vulgarity to a new level. They can make you wince and/or blush with their profane pronouncements. They demolish prim and proper. And it’s funny . . . for a minute. I enjoyed the music, but about halfway through, the dick jokes got old, and I left early.

In the end, if you really try to critique a Steel Panther concert, you missed the whole point of the show.