Trending Stories from The Marquee
You are at:Home»Features»Vibesquad
By Marquee Magazine on March 1, 2011 Features, Interviews, P.J. Nutting 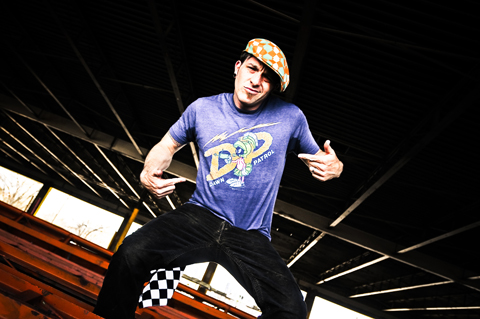 All it takes is one flash of Aaron Holstein’s trademark bass-face to make it clear VibeSquaD is all about giving audiences something that will light up their smiles. There is something absolutely therapeutic about the low-end of the audio spectrum, and after five years of making records as VibeSquaD, Holstein has perfected the art of squeezing bass out of club speakers like rigid fingers on a tube of toothpaste.

“Everything down there below 80 (Hz) feels awesome with that much power coming through it,” Holstein told The Marquee from his Boulder home studio. “A well-tuned system that has a bass response that doesn’t even stress, no distortion, that’s physical and that will change your attitude really quickly. To make people feel good, that’s a good tool. Those frequencies will actually do some chiro.”

But it’s not strictly about how much stress you can put on the roof structure. VibeSquaD is unique on the bass scene because of Holstein’s highly refined interpretation of funk music, which incorporates breakdance hip-hop style, obtuse squelches and complex melodic forms that create a funky, psychedelic trip that you only need a pair of headphones to experience.

VibeSquaD is just one of the many musical faces that Holstein uses to straddle across the jamtronica and DJ worlds, playing keyboard for Zilla and Sporque when he isn’t holding down the stage on his own. VibeSquaD released its fourth full-length album, The Fire, in October of 2010, and will collaborate with Australian producer Spoonbill for another EP in the coming months.

Zilla/Sporque fans that are saddened to see Holstein slipping away to the producer world will be excited to hear he hasn’t abandoned instruments for a laptop and keyboard. He informed The Marquee that an entire album of half-finished tracks is already completed under his newest musical persona, Orphan Alien. A self-described “recovering guitar player,” Holstein logged countless guitar gigs around Denver with Future Jazz Project in the years before Zilla. Orphan Alien will return to that sound with a soul/R&B project beefed up with VibeSquaD production, featuring Holstein on the bass guitar, keyboard, and the mic.

“It’s a project that I really need to do for my own head,” Holstein said. “I’ve been kind of wrestling with the idea of what I should be doing live with VibeSquaD to add to what’s going on, and not, in some kind of gimmicky way, karaoke along with my track.”

It’s disappointing when you catch an electronic artist doing it, but unnecessary showman-style physicality is unfortunately a part of the scene. But unless Holstein is traveling by bus with other artists, the overhead storage afforded by weekend flights isn’t enough room for his Moog Little Phatty and the cavalcade of processing that stays in his home studio. “That’s something that’s probably next for me,” Holstein continued, “because I want to do it legit, and when I do it I don’t want to bring out some corny thing that’s just portable, I want to bring out the Moog and some effects and make it sound really sweet and mix it in with the same care that I put into producing in the studio.

“It is weird to bring a computer and some plastic boxes and jump around on stage. It really is a strange format to play music, but I just accept it for what it is, because ultimately I am the only one responsible for the sound that comes out of those speakers. What suffers is that it’s like, ‘Oh, look at that guy up there making weird faces and turning a knob,’ y’know? I really would love to see the live aspect become way more interesting as far as the VibeSquaD show,” said Holstein.

Holstein will develop a larger stage presence towards the end of this year, using self-produced video that is his visual interpretation of the music. “It’ll be some cool visual environments for the music to sit in,” he said. It will all be locked into the music through a second computer onstage, providing a good test of how much tactile responsibility Holstein can handle during a VibeSquaD show. “If I can pull it off and the music doesn’t suffer, then yeah, that’s what I’ll do. But if it ends up being a really complicated thing, then I think I should just do the best thing for the overall effect and hire someone talented to run it,” he said with a laugh.

“I’m really just trying to make people feel good on a really serious level… and that’s it! The whole point is that the way the sound vibrations are organized at that particular moment feel super good, and that’s the point I’m trying to get to. So I try to keep my own shit out of the way and be a vehicle more for these vibes,” he said.