Trending Stories from The Marquee
You are at:Home»Album Reviews»Mastodon
By Marquee Magazine on April 1, 2011 Album Reviews, Brian F. Johnson 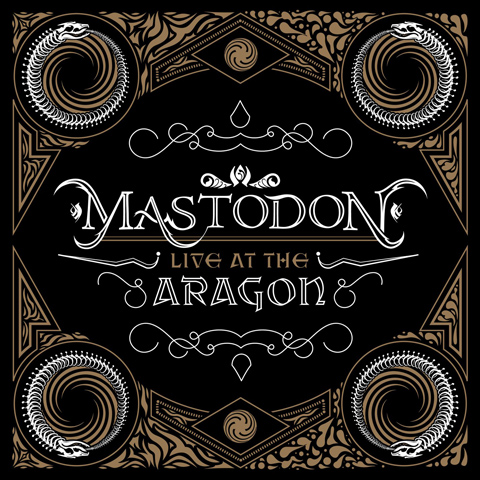 Live at The Aragon CD/DVD

By chance circumstance I happened to be in Atlanta in 2009 when Mastodon dropped Crack The Skye — arguably one of the best metal albums of the last 10 years. It was an incredible sight to behold. Everywhere you went, everything you did, you saw something about Mastodon. It was akin to being in a major city right after its team wins a big championship. To see this adoration heaved at Mastodon was a truly incredible experience, as if the whole city (even those who didn’t really care about Mastodon before) were saying, “Hey, check out what our guys can do.”

So with great anticipation I awaited this live release, recorded on the Crack The Skye Tour, where the band played the album in its entirety. As I said before, I think Crack The Skye is a genre-defining album, so to see it put forth live is a spectacle, and an ambitious undertaking for the musicians.

Luckily, they nail it — for the most part. You can hear it just fine on the disc, but on the accompanying DVD, getting to look over the shoulder of drummer Brann Dailor as he so precisely commands his kit on “Divinations” is  something that even the folks with the best seats in the house couldn’t see.

Likewise, I saw the tour when it came through Colorado and I knew that lead guitar player Ben Hinds was playing a Flying-V, but it took this video to point out that his guitar is actually all plexiglass, including the neck, and seeing that battle-axe up close, with Hinds’ tattooed hands molesting it, is simply bad-ass.

There are few bands left (if any) in this country that are truly dangerous, but I suspect Mastodon may be one of them. I have no idea what these men are like in their private lives — except for the well-circulated story about Hinds, where he and rapper Rev. William Burke got into it following a Video Music Awards after party in 2007. Hinds didn’t do well in that brawl. He had his nose broken and he suffered a brain hemorrhage from hitting his head on the floor, after Burke returned punches. Regardless, I really hope to never run into Hinds, or any of the band members in a dark alley. So it scares me a bit to make this next statement but, truth be told, Mastodon needs to work on their vocals. Now, it’s not like these songs are exactly easy to sing, but Hinds’ erie howls crack from time to time, and bass player Troy Sanders misses more than a few notes as well. Most of them are forgivable, again due to the material’s intricacy, but for a band that shows such mastery it’s sad to see live vocals take away from that.

Regardless, this CD/DVD set is a must for the Mastodon herds. It’s massive, it’s raw, and yeah, there are some imperfections, but that just makes it more rock and roll. The deluxe version of this set comes with a custom Mastodon “guitar-pick” tin (although I assume you can use it for other things), embossed picks and a reproduction of an all-access tour laminate.