Trending Stories from The Marquee
You are at:Home»Album Reviews»Fleet Foxes
By Marquee Magazine on May 1, 2011 Album Reviews, Jonathan Keller 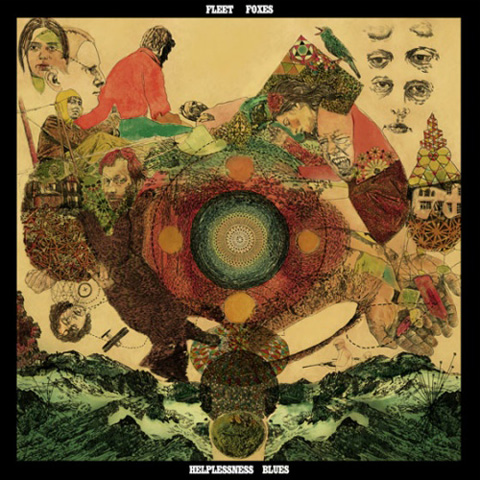 It’s been nearly three years since the release of Fleet Foxes self-titled debut album and their much-anticipated follow-up is finally seeing its long awaited release this month. Everyone can rest assured — Helplessness Blues delivers admirably.

When Fleet Foxes emerged onto the mainstream music scene they were a true modern day indie success story. The Seattle-based sextet leveraged over a quarter million song plays on their MySpace account and signed with Sub Pop without ever commercially releasing any of their recordings. The subsequent release of their self-titled debut album in 2008 continued the band’s meteoric rise as their indie folk/baroque pop-sound resonated with all walks of music enthusiasts and made Fleet Foxes critical darlings across a wide variety of international publications.  The band basically fell into mainstream success. However, the road towards the continuation of that success wasn’t easy.

If one looks at the process of recording for the Fleet Foxes sophomore album it’s clear to see that the band was definitely feeling the pressure to release something special. The initial sessions for Helplessness Blues began and abruptly stopped in February 2009. The band then scrapped and re-started sessions all across North America over the next year, including stints on the Olympic Peninsula, upstate New York, rural Washington and three different studios in Seattle.  They were obviously struggling to get things right. Their sophomore album was supposed to be released in mid-2010 but the album’s release date ended up getting pushed three times before the band and label decided on its May 2011 release.

Helplessness Blues is not much of a departure from Fleet Foxes debut album. Band frontman Robin Pecknold’s voice and songwriting is uniquely engrained into the band’s sound and although the band does appear grander and the songs come across as more mature, the overall approach of the new album should please fans who enjoy the delicateness of Fleet Foxes previous work. If the album’s first single “Helplessness Blues” is any indication, the band has matured to the extent of trying to make themselves more powerful in both their writing and in their performances.  Songs such as the previously mentioned “Helplessness Blues,” “Montezuma,” “Sim Sala Bim,” and “Cascades” all start with simple acoustic accompaniment before a barrage of choice instrumentations layer each track into a wall of acoustically percussive sound. It works well and even though the tempo of the songs on Helplessness Blues are very similar to those on their debut album, one might assume the new songs are more upbeat, brighter and even more accessible – if that’s even possible.

There is no doubt this is a good album, although it might come across as too sweet sounding for some. It’s certainly refreshing to know that music like this is tapping into the mainstream core, and perhaps Fleet Foxes will take some future risks after basking in the additional success that Helplessness Blues will likely bring them.