Trending Stories from The Marquee
You are at:Home»Features»Jason Bonham’s Led Zeppelin Experience
By Marquee Magazine on May 16, 2011 Features, Timothy Dwenger 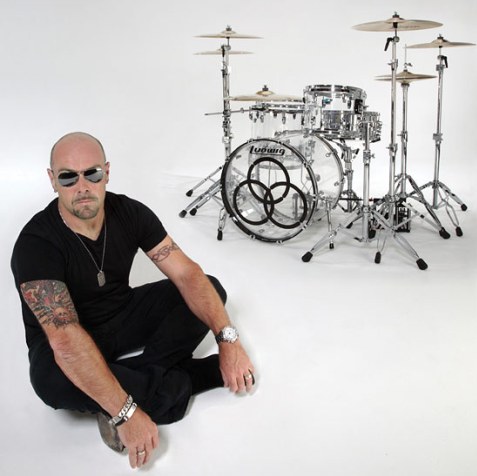 Back on September 25 1980, the world lost arguably the best drummer to ever sit behind a kit, Led Zeppelin’s John Bonham, or Bonzo as he was known to many. In the wake of his tragic passing at only 32 years old, Bonham left many infamous tales, a huge catalog of recordings and two children, Zoe aged 5 and Jason aged 14. A drummer as long as he can remember, Jason has recently chosen to literally follow in his father’s footsteps by staging Jason Bonham’s Led Zeppelin Experience.

Almost exclusively focused on Led Zeppelin material, the show features fan favorites like “Black Dog,” “Dazed and Confused,” “Kashmir,” and of course “Moby Dick,” while also diving deep to bring up rarities like “Achilles’ Last Stand” and “In the Light,” the latter of which Zeppelin never played live. First performed last year just after the 30th anniversary of his father’s death, the ambitious multimedia production is Bonham’s way of celebrating his dad’s life and music with video and audio clips, personal stories and of course the immense drumming chops that were passed down from father to son.

“Within the context of the show I talk a little about him as a personal person, you know, as a guy that I knew not so much as the guy that you know as Bonzo, but as my father. I show some of the moments we shared together which were, and are, very cherished,” Bonham said when The Marquee was recently able to catch up with him via phone from a hotel in London. “He was a man that would grow up to be The Beast, Bonzo, the legendary guy that was one of the first to throw a TV set through a window. But realistically he was my dad and just an everyday guy.”

Though it’s been more than 30 years since his father passed away, Bonham still holds on to some very special memories of the man that he called “Dad.” “He took me to see The Police and it was a cool moment. I had never been to a concert with my Dad before. I remember my Dad put me on his shoulders so I could see the band better,” he said before going on to relate a tense moment that occurred after the show. “He got us backstage afterwards so we could say hello, and it was just a great moment when my Dad stepped on Sting’s foot, who was wearing blue suede shoes at the time, and Sting said something like ‘Don’t step on my blue suede shoes.’ My Dad turned to him and said ‘I’ll step on your head in a minute.’ So that was a nice father, son moment! The meeting of old and new and I’m thinking ‘Dad, come on, don’t cause any trouble.'”

While Bonham does share some personal moments and stories about his father during the performance, the evening is focused on his favorite elements of the Led Zeppelin catalog. “Each song is chosen for a reason. There’s nothing we’ve put there because it was a popular song or whatever. I have a story for each one, but the music does the talking and I just tell a few memories that were not spoken too much and give my own personal take on when I played them with Led Zeppelin.”

Bonham has filled his father’s shoes on a couple of occasions, the most famous and most recent was during Zeppelin’s reunion show that took place at the Ahmet Ertegun tribute concert that was staged at London’s famous O2 Arena in 2007. “Just to play with those guys and to play their songs and to do the show that we did at the O2 it was a very special moment that I will treasure forever,” he said.

While Bonham is unfortunately not joined in person by any surviving members of Zeppelin itself during the Led Zeppelin Experience performances, the concert utilizes multi-media magic to bring the legendary Bonzo to life on screen above the stage where he solos alongside his son a couple of times during the night, fulfilling a dream of his father’s in a way. “I found some footage and audio of Dad being interviewed which is really special. One of the extra special ones is an interview where a reporter asks: ‘do you have any family?’ He goes ‘oh, I’ve got a wife and a son called Jason and he’s a drummer.’ The interviewer says, ‘oh, really.’ ‘Yeah,’ he says, ‘he’s four years old now. His technique is crap, but he’s got good time. My ambition is that one day he’ll play next to me at the Royal Albert Hall.’

While there are currently no plans for the Led Zeppelin Experience to take the stage at The Royal Albert Hall, the project has been on the road more than six months and has been getting great reviews on both sides of the pond. He does admit that there are many tributes to Led Zeppelin who are making the rounds on the touring circuit, but cites one major difference between those projects and his own. ” I have been lucky enough to have played with the band a couple of times. Not many of them can say that!”

Recommended If You Like:
• Led Zeppelin
• The Who
• Black Sabbath