Trending Stories from The Marquee
You are at:Home»Album Reviews»Bon Iver
By Marquee Magazine on June 1, 2011 Album Reviews, Brian F. Johnson 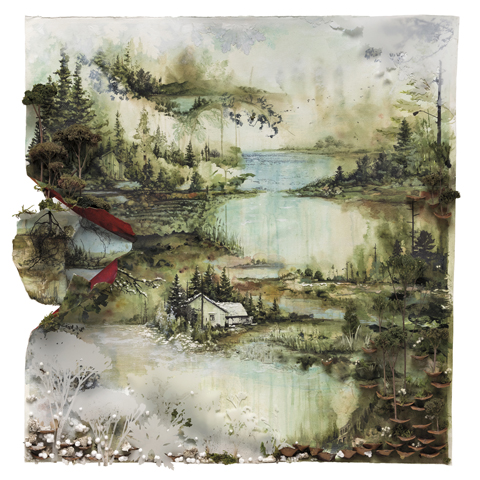 When your debut album — recorded in a cabin in Wisconsin and originally intended as demos — ends up being heralded as one of the best albums of the ’00s, your next album better be damn strong, lest you be cast out as a one-hit wonder.

But Bon Iver’s Justin Vernon didn’t think about that when he started the follow-up to his critical smash success, 2008’s For Emma, Forever Ago. Three years in the making, the new self-titled album, recorded at a former veterinarian’s clinic that Vernon and his brother converted into a studio, not only meets the aforementioned protocol, it blows it away.

Whereas For Emma, Forever Ago was sparse and quiet, Bon Iver is a more full, bigger sound that seeks to do what Vernon always wanted — provide a contrast to the typical singer/songwriter playing a guitar alone.

All of that collaboration results in massively thick textures, and transforms the singer/songwriter foundation into a full-fledged rock album, even on the most mellow and quiet tracks. Quite frankly, several of the songs almost sound as if they got messed up in my iTunes between this release and the new My Morning Jacket album.

Speaking of messups by iTunes, this album was set to be released June 21, but in mid-May, the day that the disc’s first single “Calgary” was set to be released, iTunes accidentally released the entire album. The error was quickly rectified, but it was too late, as many had already grabbed the full release and re-posted it to torrent sites across the web. The label, iTunes and even Vernon’s attorney have all declined to comment.

iTunes blunders aside, the album, in which every tune is named after a place, shouldn’t have much trouble garnering the same support as its predecessor. Vernon’s simple approach, and his insistence on having other musicians add depth and flavor is brilliant, and that, coupled with sincere, deep, honest songwriting, will prove it a winner, even if iTunes messes up again and gives it to the world for free.                                — BFJ