Trending Stories from The Marquee
You are at:Home»Live»Yes & Styx at Red Rocks Amphitheatre
By Marquee Magazine on July 27, 2011 Live, Live Reviews 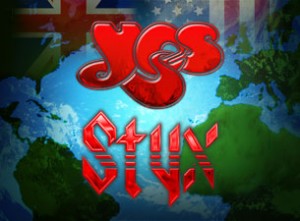 Driving through death—a.k.a. a thunderstorm complete with monster lightning and torrential downpour—was a rather daunting start to the evening. Judging by the number of ponchos, however, the early threat of treacherous weather scared few, if any, away from Red Rocks last night. Audience members were armed with rain gear and ready to see Yes and Styx perform.

Yes kicked off the night with “Tempus Fugit”, and the first drops of rain fell with the first notes. The band continued through the song even though Steve Howe looked nervous playing his electric guitar, and Geoff Downes had to wipe down his rig, which included nine different sets of keys. After the first song, there was a slight pause in the show while Yes evaluated the weather and the threat of electrocution, but at the request of lead singer Benoit David, the audience apparently clapped the rain away. The rain let up, and it was on with the show.

Yes performed with a simple set. They had one large video screen spanning the length of the stage which frequently flashed their name in different fonts over various psychedelic designs. The simplicity suited the band. They aren’t showy individuals, why should their set be? The focus of the show was on their music with original member Chris Squire on bass, Howe on guitar, Downes on keys, Alan White on drums, and David taking lead vocals.

For the most part, Yes stuck to psychedelic rock songs from the past, such as “Heart of the Sunrise”, “Your Move” and “Owner of a Lonely Heart”. They did play the title track off their newest studio album Fly From Here. It was received well, although not quite as enthusiastically as the rest of their music. As could be expected, David, Howe and Squire rocked the vocal harmonies true to Yes’ style, and most songs included a generous interlude for the band to jam. Howe frequently took off on the guitar backed by Squire’s reverberating bass lines. I was bummed it was too early for the large TV screen at the front of the amphitheatre to be effective (there was still too much light) because I would have loved for the camera to zoom in on Howe’s fingers during “Yours Is No Disgrace”. Each musician gave a solid performance, and collectively Yes left the crowd on their feet waiting for the Styx.

When the Styx came on stage, I swear something in the air changed, and I’m talking something besides the extra puffs of weed. The energy in the amphitheatre picked up dramatically, and it was infectious. The audience sat for maybe a total of three songs while the Styx performed. People were more than happy listening to Yes, clapping their hands, letting out a hoot or a holler every once and a while, but the Styx were something to watch. From the first line of their first song “Blue Collar Man”, they were using the entire stage. They were jumping, moving and interacting with one another. Lawrence Gowan had his keyboard mounted on a circular platform and connected to this spinning contraption, and he showed off his ability to spin the keyboard 360◦ quite often. There were stairs and lights every color of the rainbow that flashed in time with the music. It was intense.

I have to say that the Styx were experts when it came to establishing a connection with the audience. Unlike most bands, one member didn’t do all the connecting. Lead vocalist and guitarist Tommy Shaw, guitarist James “J.Y.” Young and Gowan all did their fair share of speaking into the microphone. Shaw greeted the amphitheatre with, “Hello friends! Styx is at Red Rocks mama! What a night!” Then he asked, “Shall we have ourselves a rock show?” You can bet they received a rather large “Yes!” in response. From then on, the audience was fully engaged. They sang the lyrics for the band when they dropped out during “Too Much Time on My Hands”, participated in Gowan’s call and response introduction to “Come Sail Away” and eagerly raised their voices whenever they were called upon to do so.

The music did not suffer for all the showmanship. I give props to Todd Sucherman for not getting distracted by all the flashing lights, if he could even see them over his massive drum set. Gowan was able to play his part on keys with his back to the keyboard and sing lead vocals while jumping around stage. Shaw and Young took turns jamming to solos on the guitar, holding their instruments every which way. Gowan, Shaw and Young all had impressive vocals unmarred by age, and Shaw can still hit tenor notes with an ease that will irritate most vocalists.

Midway through the show, Shaw announced a special guest. Original bassist Chuck Panozzo came on stage with buzzed hair and wearing a suit. Needless to say he stood out against his scruffier, rocker band mates.  Panozzo played alongside current bassist Ricky Phillips for “Fooling Yourself” and later during “Come Sail Away” and “Renegade”. Overall, Styx high energy performance was a rock show through and through, which is just what they promised.