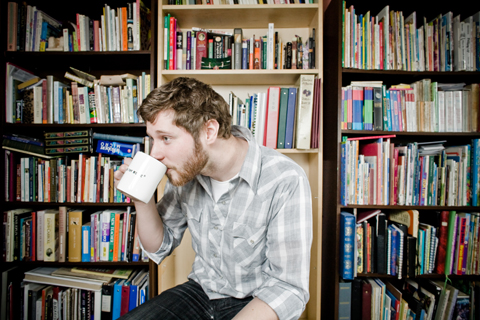 Over the last seven or eight years, the music industry has watched a staggering number of artists rise to international fame out of the Canadian music scene.  From The Arcade Fire to Broken Social Scene, and from The New Pornographers to Wolf Parade, many of the bands fit squarely into the non-descript genre of indie-rock. But Vancouver singer/songwriter Dan Mangan is crafting a career that may well get his name mentioned in the same breath as some of these artists and alongside legendary songwriters like Gordon Lightfoot, Leonard Cohen, and Neil Young.

When The Marquee caught up with Mangan, he was at a gas station somewhere in Canada en-route to a little festival in Perth, Ontario. He was very forthcoming about the rollercoaster ride of the last few years and lent some insight into why his upcoming album, Oh Fortune, may catch some fans a little bit off guard. “I do think that on some level there was a bit of a need to push away from the direction I had gone previously, and part of that is because you go crazy if you do the same thing over and over again,” Mangan said. “I have said many times that I just could not make the same record twice. With the last record, we just did whatever felt right and we lucked out. A lot of doors opened up, we got played on the radio, and all kinds of crazy things happened. I think the safe thing would be to say, ‘Well, that will work, so let’s do it again.’  But, in terms of getting to sleep at night, it was necessary to keep pushing and keep growing and keep evolving, and not rest on the idea that ‘it worked before and it could work again.’ This record could fall flat on its face, I have no idea what people will think of it, but at the end of the day we are feeling good about it and feeling like it was the necessary move to make.”

For those familiar with Mangan’s previous work, Of Fortune does represent a bit of a departure from the sound of his 2008 breakthrough record, Nice, Nice, Very Nice. Many of the tracks on the new record aren’t quite as instantly accessible as some of his older material, but they grow on the listener slowly and steadily until they weave their way into the soundtrack of your subconscious.  While there are orchestral string arrangements, hard charging rockers, and screaming Neil Young-esque guitar solos, Mangan’s observational songwriting style is still clearly present on top of it all.

Mangan has honed his distinct style over roughly 15 years of writing and though his first recording, All At Once, wasn’t released until 2003, music has always been an integral part of his life. “As a kid, the house filled with all kinds of instruments from days gone by and my parents were very clear that they would help us learn to play any instrument that we wanted to,” he said.  “There were a lot of records, too, and I did a lot of listening as a kid. I would just sit with headphones and listen to vinyl for hours on end. Eventually, when I was a teenager I started writing songs and was part of some terrible bands. What was a really intense hobby slowly became a career, but more than that, an obsession.”

That obsession is one that has landed Mangan and his band on some pretty huge stages around the world and gotten him into some pretty interesting situations. “We have been very fortunate that we’ve been able to play a lot of different events.  It’s kinda nice to do the big ones and the small ones and everything in between,” he said.  “We played Glastonbury a few weeks ago and that was insane! Two hundred thousand people and a foot-and-a-half of mud. We played last year as well and last year for me was particularly nuts because there were all these crazy encounters; I ended up on a tour bus with Willie Nelson and Snoop Dogg and there were all these other bizarre things going on. This year was a little more ‘as expected’ in terms of the fact that there weren’t really any crazy circumstances like that, but it was a whole heck of a lot of fun and we really enjoyed ourselves.”

When Mangan hits Colorado for the first time this month, chances are Willie and Snoop won’t be hanging out in a bus backstage, but the Folks Fest crowd is in for a treat just the same when Mangan and his band take the stage.  Over the last couple of years, the name Dan Mangan has been rolling off more and more tongues in Canada and across the pond in Europe, but things are happening a bit more slowly here in the states. “America is a big fish to fry and it’s happening slowly for us down there,” he said. “Certainly, getting the opportunity to play Sasquatch and the Rocky Mountain Folks Festival are big steps for us to get a foot in the door. When it comes to the states you have to be quite strategic because you could lose a lot of money touring the wrong way. The last two or three years have been incredible for us, but there were a good six or seven before that where things were going very, very slowly. The buzz machine can be amazing but it can also be devastating, so we are happy to win people over one by one.”