Trending Stories from The Marquee
You are at:Home»Cover Story»Death Cab for Cutie’s Code and Keys traverses new territory for the band
By Marquee Magazine on August 1, 2011 Cover Story, Features, Interviews, Matt Treon 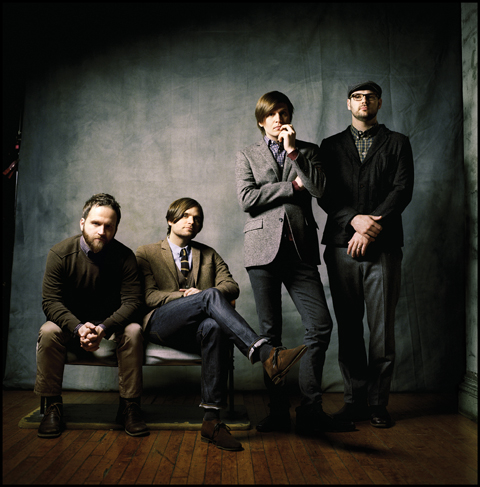 Death Cab for Cutie — pioneers of bedroom-pop rock — have spent over a decade slowly shedding their own stylistic restraints one album at a time. But with their latest effort, Codes and Keys, they’ve embraced elements of their entire catalogue (along with elements spawned from side-projects), covered new musical ground, and made their most diverse album yet.

In a recent conversation with The Marquee, Death Cab bassist Nick Harmer said, “We tried to explore some new sounds and push ourselves away from our native instruments, and to write in a musical landscape that inspired us all as players. But most of it started to develop and reveal itself as we started recording. We’re a band that is never really satisfied with where we’re currently at. I’m always working to be a better musician, a better bass player and a better band member, and everybody else in the band is always doing the same thing.”

And Codes and Keys, Death Cab’s seventh studio album, does sound different from the rest of the band’s previous material. Along with the principal guitar/bass/drums setup, Codes and Keys also incorporates soft twitchy micro-beats that pulse and intertwine with sparse melodies, while layers and layers of instrumentation float atop complex arrangements. It is an album full of subtle sonic designs; even the most straightforward cuts are engulfed by scads of noises.

On Codes and Keys, Death Cab explores and embraces the musical terrain of synths — they drop the guitars on a few songs, exchanged for vintage keyboards. The band citied synth/musical landscaping master Brian Eno’s Another Green World as a major influence on the new album, most noticeable on the track “Unobstructed Views” (which is unmistakably even an Eno-esque song title), as well as Orchestral Manoeuvres in the Dark, LCD Soundsystem, New Order, and David Bowie.

Another sound that had yet to infiltrate Death Cab’s songs before, but clearly reverberates throughout Codes and Keys, is that of the gentle lilting electronic sounds that lead singer Ben Gibbard and musician/producer Jimmy Tamborello first introduced as The Postal Service. As the primary songwriter for Death Cab (and with hoards of fans clamoring over the past eight years for a second Postal Service album), it’s not too surprising that the part of Gibbard’s personality carved out by the side-project eventually crept its way onto a Death Cab album.

“Ben wrote about 30 demos,” Harmer said of the songwriting for Codes and Keys, “some fully realized songs, some just sketches of lyrics and melodic ideas that are moving him and he’s reacting to. And that’s how we’ve pretty much done it with every album. Then as a band, we all went through them, and once we had a good chunk of songs that everybody was really excited about going for, that’s when we started booking studio time.”

The diverse sounds on the new album could also in part have been influenced by distance and changes in location. Tracking everywhere from Southern California to Portland, Ore. to Vancouver, British Columbia, the recording of Codes &Keys took place in eight different studios. A large reason for the staggered recording sessions, as explained by Harmer, was because several of the band members are now family men—a fact that seems to have extended its influence on Gibbard’s lyrics as well.

Known for his poignant narratives and trenchant introspective commentaries, Gibbard’s lyrics are often enveloped in abstract melancholic imagery and longing. But the lyrics on Codes & Keys seem to be much less introspective in the dark and ostensibly self-loathing manner they took on Narrow Stairs, and instead sound like the efforts of a songwriter looking at and analyzing a complex world around him. At first listen it sometimes even seems as though Gibbard is engaging in nonsensical rhymes for much of the album, but further listening begins to reveal, instead, a guy trying to make sense out of the almost labyrinthine intricacies of that world.

But the newest bit of territory surveyed by the band, and one of the main differences between their new album and past ones, is the introduction of an outside personality at the mixing board. Death Cab guitarist/pianist Chris Walla produced Codes and Keys, as he has every other Death Cab album (as well as having his engineer/producer fingers in scores of other indie bands’ albums), but slid the mixing chair over to British studio maven Alan Moulder (My Bloody Valentine, The Killers, The Smashing Pumpkins, Blonde Redhead, Interpol, et al.), who applied a bit of a studio-money glossy finish (Atlantic Records picking up the bill on that one — another major evolution for Death Cab over their career) that provides a very fitting sonic structure for Codes and Keys’ expansive topography.

As for how Codes & Keys’s elaborate sound/arrangements translate live, according to Harmer, “We’ve never really been a band that’s been too overly concerned about representing every moment and every sound on the album exactly how the album sounds. I think we’ve always enjoyed the fact that there’s been a little bit of a different presentation of our music and a different energy live. We make sure to capture the most salient and most important melodic bits of each song,” he said.