Trending Stories from The Marquee
You are at:Home»Album Reviews»Gillian Welch
By Marquee Magazine on August 1, 2011 Album Reviews, Jonathan Keller 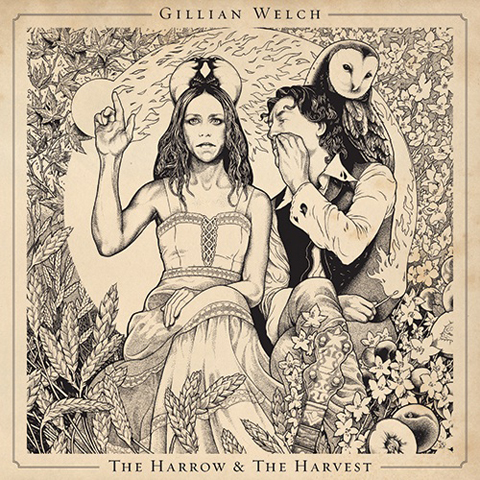 The Harrow & The Harvest

It has been eight long years since singer/songwriter Gillian Welch has released a full-length album and her recent release The Harrow & The Harvest continues to showcase her rural folk honesty with sparse instrumentation, bluegrass harmonies and Appalachian swing. Even though the album is not much of a departure in sound from her previous work, Welch and partner/producer David Rawlings are back together playing as a duo, keeping their backwoods Americana tradition alive and well.

It would be nice to say that Welch had a busy eight year stretch since the release of 2003’s Soul Journey, but in reality that eight years was mostly uneventful in terms of artistic output. She did some heavy touring with Rawlings shortly after Soul Journey’s release and contributed to David Rawlings Machine’s debut album which was released last year. That album found Rawlings and Welch swapping places with Welch lending a supporting role — something Rawlings has done for Welch for the past decade.

Truth of the matter is, Welch and Rawlings were struggling with Welch’s follow-up and had been working on what would become The Harrow & The Harvest for the past four years, recording nearly three albums worth of material over that span. The main holdup for a completed product stemmed from the duos difficulty in whittling down Welch’s songs due to their unhappiness with the songs themselves and the recording outcomes. In the end they chose and re-recorded 10 songs that would define The Harrow & The Harvest, which clocks in at around 45 minutes. Make no mistake, The Harrow & The Harvest is a mellow acoustic album, but that works well for Welch as it allows the delicateness of her songwriting to take center stage. There is plenty on this album to be proud of and the songs “Scarlet Town,” “The Way it Will Be,” “The Way it Goes,” and “Silver Dagger” will all become staples of her catalog. At times, a few songs can be a little overly sleepy and mundane, such as “Dark Turn of Mind,” but overall the album should strike a strong chord for those that appreciate the honesty in Welch’s voice and message.      — Jonathan Keller