Trending Stories from The Marquee
You are at:Home»Features»Keller Williams brings three projects to Mish shows
By Marquee Magazine on August 1, 2011 Features, Interviews 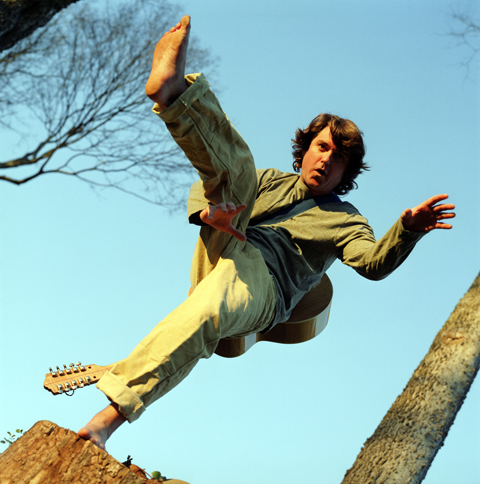 Since he released his first album in 1994, loop artist Keller Williams has acquired the tagline “The One Man Jam Band.” His skills as a soloist are something to marvel at, but Williams’ musical collaborations are no less impressive, and recently he’s been going nuts with different projects. While most of Williams’ shows portray only one side of the performer, when he hits Mishawaka this month, the sets will feature his solo work as well as two of his side projects — Keller & The Keels and Kdubalicious.

In a recent interview, Keller Williams told The Marquee his performances at the Mish will not include music off his newest album Kids, but instead, Williams will stick to material produced for mature listeners and loop a set of his acoustic dance music both nights. Aside from his solo set, the two shows will bear little resemblance. The first night Williams will be rockin’ soulful reggae in Kdubalicious, and the second night he’ll be jammin’ to bluegrass alongside The Keels.

Renowned flatpicker Larry Keel and his acoustic bass playing wife Jenny Keel have been longtime collaborators with Williams. “That night will be full-on crazy bluegrass, but somewhat different from traditional bluegrass. It’s not your father’s bluegrass,” Williams said. Keller & The Keels will be playing songs from their most recent cover album Thief as well as material off their older album Grass. The audience can also expect the trio to play some new material and a few personal favorites that haven’t been recorded.

Kdubalicious is Williams’ fairly new project, and it’s something vastly different compared to his previous work. “The one thing that’s really different about this project is that there is no guitar,” Williams said. The band allowed Williams to pick up an instrument he has long been obsessing over — the bass. “All the records I’ve put out have been heavily focused around guitar. For me to be able to lead a band onstage with a bass is really special; it’s powerful. It’s super different from me doing it with the guitar,” he said.

Like many bands and side projects, Kdubalicious started in a basement. Williams would get together and jam with two musicians from his hometown in Virginia, Jay Starling and Mark D of the local reggae band Transmitters. The jam sessions then turned into the reggae-funk project with Mark D on drums, Starling on keys and Williams on bass.

“What attracted me to the project was Jay and Mark’s knowledge of reggae,” Williams said. “As far as the drummer goes, it’s kind of tricky because it’s a very simplistic way to play. Mark D has really got that reggae beat. He owns it, and Jay is all over the place musically. He’s just a genius.”

Much like experimenting with the bass, playing music off his newest album Kids for a younger crowd has influenced Williams’ live show immensely. “Playing the kids’ music has really brought me back to the roots of where I came from,” Williams said. “There’s an element of playing that I’ve gotten away from with the technology that’s crept into my set. This whole looping thing has become a bit of a monster. Getting into the kids’ music, I’m actually talking to the kids and stopping and explaining things. The show the past decade has really focused on the performance and not necessarily getting a verbal connection with the audience. The kids’ music has brought it all full circle.”

The 31 minute family-friendly Kids CD was eight years in the making and has come from various sources of inspiration. Like most of his music, Kids is a fun, playful album, and Williams does not sacrifice musicianship for the sake of simpler themes.

After the tour, Williams hopes to release two new CDs in December, making a grand total of 18 (19 including his greatest hits album 12). Bass highlights the work of Kdubalicious, and Keys features Williams solo on piano and vocals. Keys is a follow-up to his 2008 album Rex, which captures his performances of Grateful Grass. Like Rex, Keys will be a digital release of Grateful Dead covers, and all the proceeds will go to the REX Foundation.

himself to be brilliantly balanced on stage and off, even when creativity seems to be almost leaping out of his body, and it’s also where the true fun of Keller Williams is revealed.