Trending Stories from The Marquee
You are at:Home»Cover Story»Thievery Corporation strips away the fear on new album
By Marquee Magazine on August 1, 2011 Cover Story, Features, Interviews, Timothy Dwenger 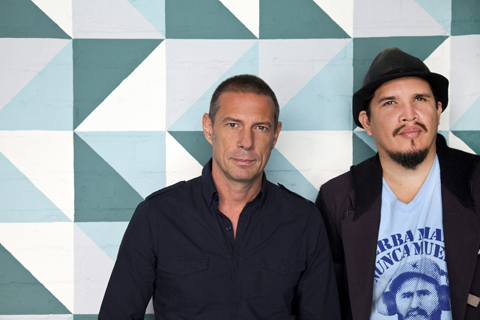 So many people in the world struggle to keep themselves in one career, let alone two. Eric Hilton, one of the two masterminds behind the innovative Thievery Corporation sound, is one of the lucky, or insane few who seem to be successfully juggling three distinct careers. Aside from his role in Thievery Corporation, he recently made his movie directing debut with the film Babylon Central, and he owns several restaurants in the 14th and U Street-area of Washington, D.C., along with the famous 18th Street Lounge, where Thievery Corp. was born when Hilton met fellow producer and DJ, Rob Garza more than 15 years ago.

Truth be told, these careers do overlap to an extent, with Hilton’s music featured prominently in Babylon Central, and of course the bars, restaurants, and lounges under Hilton’s watch provide an excellent proving ground for Thievery Corporation and other artists from their Eighteenth Street Lounge Music record label.

When The Marquee caught up with Hilton, he was knee deep in his restaurant career. “We just opened another spot four days ago, it’s called Blackbyrd, spelled with a ‘Y,’ like the Donald Byrd record,” said Hilton.

Though Hilton is still dedicated to creating music with Garza, he admits that juggling his careers is not an easy task. “It’s hard right now, I’m not on tour with the band as often,” he said. “I actually wanted to take the year off from touring but I seemed to be the only one who felt that way. So the compromise is that the other 15 people will roll out without me from time to time. They were just in Europe and unfortunately I had to miss those gigs, which was kind of a bummer, but you can only be in so many places at one time. I will be at Red Rocks, though.”

While it’s true that he and Garza are the core of Thievery Corp., Hilton is quick to stress that his role onstage is not nearly as important as his role in the studio.  “The heavy lifting on stage is really done by Hash, the bass player, Rob Myers, the guitar player, and all the other musicians. We are there playing but we aren’t the main part, which is ironic because we are the main part when we are in the studio,” said Hilton.

As Hilton mentioned, the Thievery Corporation live band is more than 15 people strong. In addition to Hash and Myers, the band features horns, a percussionist, a drummer and, of course, a deep stable of powerful singers who keep the show fresh as they rotate in and out throughout the evening. This summer when the band hits the road in support of their new record Culture Of Fear, seven or eight different singers may grace the stage on any given night.

Though, the stage show is a sort of carnival-like atmosphere, in the studio, Hilton and Garza play many of the instruments, write nearly all of the music, and are responsible for the brilliant production that makes a Thievery Corporation record sound like a Thievery Corporation record. They do, however, enlist outside help when it comes time to lay down vocal tracks. While in the past they have worked with such luminaries as David Byrne, Wayne Coyne of the Flaming Lips, Femi Kuti, and Perry Farrell, Culture of Fear finds Hilton and Garza teaming up with lesser known, but equally captivating talent. The album’s politically charged title cut features Mr. Lif rapping over an edgy, upbeat, horn-laced track that would have fit well alongside many of the songs from the group’s most up-tempo release to date, 2008’s Radio Retaliation, while the album’s silky closing track “Free” features newcomer Kota contributing a stunning vocal performance.

Like Radio Retaliation, the new record carries with it a strong political message about the “culture of fear” that has invaded our country and infected our lifestyle for the last ten years.  Though Mr. Lif penned the lyrics to “Culture of Fear,” the viewpoint reflected in the lyrics is one that is shared by Hilton and Garza.  “We were just talking a lot in the studio about this atmosphere that we’ve been living in for the last ten years of waiting for the next shoe to drop.  Whether it’s terrorism or financial collapse, Rob, myself, Lif, we all pretty much concur that people are purposely being kept on edge so that they can be controlled.

“We are definitely going through some sort of paradigm shift,” Hilton said. “I think we are living in this Orwellian time which is the culture of fear. Our message is that there is nothing to fear.”

With the overt political statement out of the way after the second track on the record, the pace of the album mellows pleasantly and focuses on Thievery Corporation’s more down-tempo stylings. The album is almost custom made for relaxing with a cocktail or something mellower, and Hilton made a point to say that he and Garza intentionally set out to create a record with this kind of feel. “This record just started to take shape around a body of songs we liked with a very mid-tempo, down-tempo, rock trip-hop hybrid that really appealed to us,” said Hilton.

Sixteen years into a staggering career and Thievery are still releasing music that is living up to the high bar that they set for themselves early on, and that’s nothing to be ashamed of.