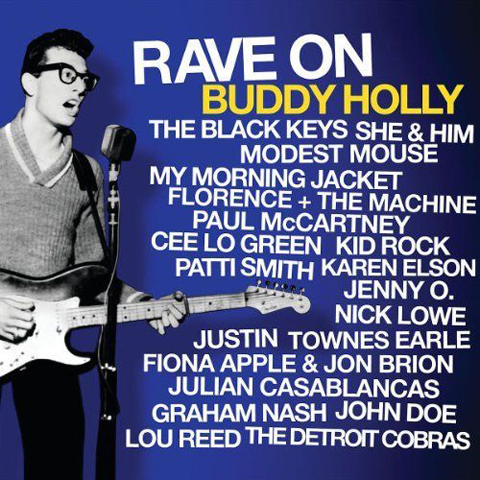 It takes a special artist to leave a musical legacy as rich as Buddy Holly’s, especially taking into account he was killed in a small-plane crash at the age of 22 and only had three active years as a recording artist. Holly has been gone for over a half-century but his musical influence is still alive and well as evident in this new tribute compilation, Rave on Buddy Holly.

The album carefully presents Holly’s simplistic, yet great songwriting and does an excellent job of connecting Holly to a younger generation of music enthusiasts by having a slew of big-time artists cover some of Holly’s most beloved songs.

One of the most impressive things about Rave on Buddy Holly is the staggering list of artists involved. Artists who contributed tracks include  The Black Keys, Fiona Apple, Paul McCartney, Cee Lo Green, Julian Casablancas (The Strokes), She & Him, Patti Smith, My Morning Jacket, Modest Mouse, Kid Rock, Lou Reed, and Graham Nash. The ringleader is Paul McCartney and even though his raunchy and lazy performance of “It’s So Easy” is one of the weaker songs on the album, his involvement was vital as he owns Holly’s publishing catalog and helped see the project through.

Even with this star-studded lineup there are some straight-out dud tracks, including Lou Reed’s distorted and unmelodic take on “Peggy Sue” and Modest Mouse’s acoustic flogging of “That’ll Be the Day.” Even with a few poor performances of some Holly’s biggest hits, Rave On Buddy Holly as a whole is strikingly positive with some surprise performances by unsuspecting artists, including “Dearest” by The Black Keys, “Everyday” by Fiona Apple, “(You’re So Square) Baby, I Don’t Care” by Cee Lo Green, “Changing All Those Changes” by Nick Lowe, and the beautiful ballad “True Love Ways” by My Morning Jacket. There is plenty of goodness to make the rounds.

Rave On Buddy Holly is not something to be studied or analyzed, rather just a collection of songs with a common thread in both sound and Holly’s influence. It would make a great party soundtrack and is one of those albums that would brighten any room when flowing through loud speakers. The album does a great job of paying tribute to a man whose biggest musical influence is probably the hardest to pay tribute to – Holly set the standard for what a rock and roll artist could be. He was the first in the rock genre to write, produce and perform his own songs and he also set the template for the standard rock band: two guitars, bass and drums. In reality, Holly influenced thousands of bands without them ever really knowing it.                         — Jonathan Keller