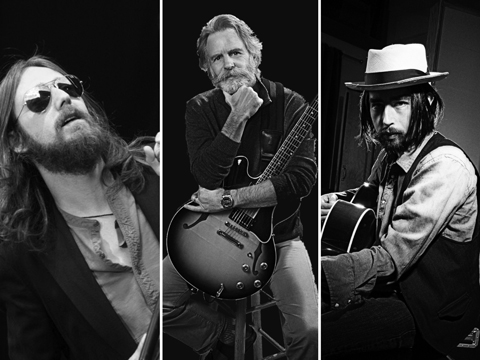 Every August, when the heat of summer is starting to fade and water levels have receded, Planet Bluegrass throws one of the most laid back festivals around: The Rocky Mountain Folks Festival, or simply, Folks Fest.

While the lineup is always a ‘who’s who’ of musical luminaries, this year offers something very special on Saturday night, something that may never happen again.

To close out the day on Saturday, festival director Craig Ferguson and his staff have booked the first, and possibly the last performance of the aptly named Weir, Robinson, Greene Trio.  The group features Bob Weir of the Grateful Dead, Chris Robinson of The Black Crowes, and Bay Area songwriter and member of the Dead’s extended family, Jackie Greene. The Marquee caught up with Greene to pick his brain about the project as he and his band traveled down the West Coast to San Diego, and it quickly became clear that things were still in the very early stages of development.

“I know about as much about it as everyone else,” Greene said. “We’ve all played together in some form or another in the past, so I think it originated as a good excuse for us all to get together and play some music.”

While they do seem to run in the same musical crowd, the three most notably played together with the Grateful Dead offshoot, Furthur, back in March of 2010 during Phil Lesh’s 70th Birthday Bash in San Francisco.

As can be expected, the setlist for that evening was largely made up of Grateful Dead songs with a couple of covers thrown in, and Greene predicted largely the same kind of thing for the trio’s appearance at Folks Fest. “We will probably be playing lots of Grateful Dead and Grateful Dead related material,” he said, before whetting our appetite for a little something more. “We’ve not written anything new together, but I wouldn’t necessarily count it out. We very well might come up with something.”

The idea that they might write something together stands to reason, as all three are prolific songwriters in their own right. Weir, of course, has written countless songs with John Barlow and on his own over the years, while Robinson handles a bulk of the writing duties for The Black Crowes; and Greene has penned literally hundreds of songs of his own, many of which stand up to anything written by the other two members of this trio. In fact, he recently released a book of his lyrics entitled Gone Wanderin’, The Songs of Jackie Greene 2001 — 2011.

“I was going through some of my old notebooks and demos and noticed I had several songs that I’ve never played live or recorded commercially in any way,” he said, discussing how the book project got started. “I thought it would be an interesting project to ‘collect’ all my lyrics from the past 10 years and put them into a book. It’s not totally uncommon, as you see many other songwriters doing the same thing. I added some footnotes and whatnot to many of the songs to give a little insight regarding their creation, etc.”

While it’s easy to hope that the next volume of “The Songs of Jackie Greene” will include lyrics co-written by Weir and Robinson, it will remain to be seen until these three heavyweights strap on their acoustic guitars under the stars in Lyons later this month.

Of the three, only Weir will be visiting the festival site for the first time as a performer.  Robinson played the festival back in 2003 and Greene was featured on the main stage in 2005. “I have fond memories of the place,” Greene said. “I remember there was a little stream near the backstage area that I kept walking down to for some reason. I remember the people being very mellow and having a good time all around. I’m looking forward to going back!”