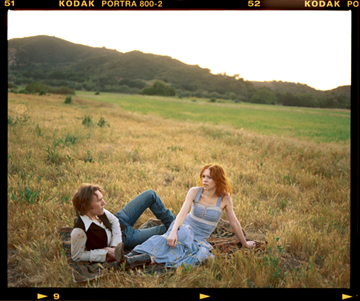 As a cold front blew into Boulder on September 6, transforming the summer landscape into a dreary spittoon – neither summer nor autumn laying claim to the unfinished portrait of grey watercolor on a cloudy canvas – I couldn’t stop wondering if it was the perfect weather for a Gillian Welch show. After all, there are few songwriters who can capture a melancholy mood so naturally, and even fewer who can integrate those emotional terrains into an enduring, modern folk landscape. She describes her latest album, The Harrow and the Harvest, as “ten different kinds of sad,” which is only half true. While each of those songs is inspired by a certain kind of sadness, there are flourishes of joy to be discovered somewhere in the clouds, a light materializing in those spaces where story and storyteller connect.

Aside from the weather, the venue of choice, the historic Chautauqua Auditorium, was equally fitting for the occasion. The auditorium resembles a giant barn (and it sounds like a giant barn too), lending a certain charm that nurtures the southern sensibility that Welch and her counterpart, David Rawlings, personify. After their first two songs, “Tear My Stillhouse Down” and “Scarlet Town,” it was evident that the crowd was perhaps too polite for the informal setting, leading both Welch and Rawlings to comment on how quiet and dark it was onstage. “We’re feeling really lonely up here,” Welch quipped before asking (not for the last time) for more stage light.

The pair then played two songs from their second album, Hell Among the Yearlings. Gillian put on a banjo for “One Morning” before taking a stroll into darker territory with “My Morphine,” which sounded eerily like a tribute song to a lost lover. The voice, pace, and presentation were convincing enough to thoroughly blur the line between art and real life, enough so that I felt genuinely concerned for her, at least before realizing that Welch’s penchant for such evocative characterization was one of the reasons I was attending the show in the first place.

Between songs, the rapport between Welch and Rawlings was entertaining enough to bring me back into the present moment. Rawlings made a joke about the area at some point, to the effect of “we were in town and a big SUV pulled up next to us. The bass was cranked up high, and they were blaring the theme song to NPR’s ‘All Things Considered.’ We knew we were in Boulder at that point.”

The two act as guides to a southern-gothic divine comedy, ever conscious of the various circles of despair in which their characters operate, from lonely boxcars to dead-end jobs in greasy-spoon diners. At the same time, the music is never as dreary as the subject matter would imply. Before every song they step away from their mics and hum the upcoming harmony, barely audible. Each one is unique and meticulously crafted, and when delivered, they evoke a musical feast, warm apple pie glazed in the maple syrup of memory. Their stories are shared like crumbling cornbread on the plate, the vignettes as familiar as any small town bakery. Even when subdued, their complementary voices blanket the darkest alleys, much like church bells ringing through the streets.

So even after the sojourn into the proverbial soldier’s joy, after Rawlings joked about going from a slow depressing song to a faster song, equally depressing, it was hard to feel depressed at all. “The Way It Goes” is actually an appropriate metaphor for most of their songwriting. Neither musician dwells on Becky Johnson’s heroin overdose, or Miranda’s lost pussycat, or the scores of other down-and-out characters filling their vast repertoire. There’s not enough time to wallow in the way things are. Instead, the meter stomps forward one bootstep at a time, while Rawlings, adorned in a suit and cowboy hat, plays brisk and complex guitar runs with little hint of looking back.

And that’s the way things went throughout the set. “Elvis Presley Blues” captured the glory of Elvis’ debut on television, “Annabelle” evoked the hard times of homesteading, “Wrecking Ball” offered an apt metaphor for the various trials of growing up, while “Red Clay Halo” playfully looked back toward the imaginative realms of childhood.

By the second set, the crowd began acting more appropriate, and by appropriate I mean rowdy. After the semi-autobiographical “No One Knows My Name,” a seemingly unhinged patron began to grunt out some sort of incomprehensible jargon, which was greeted with delight by Welch. “We need more of that guy,” she laughed. The crowd almost took the hint to heart, occasionally shouting out and even shifting in their seats from time to time. I was beginning to feel less embarrassed.

The next three songs, “Hard Times,” “Tennessee,” and “Six White Horses,” were from the new album, although it would be hard to call any of the songs “new.” There is certainly a timeless quality to Welch and Rawlings’ songwriting. With few exceptions, their choice of metaphors are more less unconstrained by overtly modern preoccupations. Rather, they integrate the struggles of modern life into a much broader musical heritage. Coupled with their stripped down, acoustic approach (even Rawlings’ ambitious guitar leads have a simple, homegrown quality to them), they astutely avoid the pitfalls that so often consign bands to particular eras and musical fads, guaranteeing a lasting relevancy for years, and perhaps generations, to come.

Conversely, such an approach can lead to criticism that the duo hasn’t evolved in any real sense. From the perspective of production, it would be difficult to place any particular song within the context of an album, phase of artistic development, or even a particular decade. Instead, it appears that their repertoire is geared towards an all-encompassing songbook, in the same tradition as Woody Guthrie, the Carter Family, or a host of folk heroes. But one should make the distinction between sounding “timeless” and sounding “dated.” To their credit, they have the rare ability to showcase their modern sensibilities by virtue of not sounding dated, a distinction that even their famous forbears cannot  always claim.

Granted, it would be hard to make the claim that a song like “Six White Horses,” which had Rawlings summoning the gods of old-time banjo and Welch abandoning her instruments altogether for some good ol’ fashioned clogging and thigh slapping, is in any sense modern, but it would be equally difficult to claim that it wasn’t thoroughly enjoyable to watch. That said, the songs that followed, the modern classic “Look at Miss Ohio,” the joyously sinful “Sweet Tooth” (sung by Rawlings), and “Revelator,” which included an extended solo and thrilling crescendo courtesy of Rawlings’ 1935 Epiphone Olympic, showcased their talent in blending the old and the new into a seamless narrative.

The set ended with a cover of Eric Andersen’s “Dusty Boxcar Wall,” followed by two double-encores. “Down Along the Dixie Line” and the inspirational hymn “I’ll Fly Away” could have been written in the same creative outpouring, but are actually separated by 80 years. The latter, written by Albert E. Brumley in 1929, made a resurgence in the movie O Brother, Where Art Thou, courtesy of Welch and Allison Krauss, and remains untarnished.

The final encore was a similar pairing of old and new, “The Way it Ends” and the classic duet “Jackson,” originally made famous by Johnny and June Carter Cash. Interestingly, the male and female harmonies in “Jackson” were switched around to cater to Rawlings’ higher registers, leaving Welch to sing the lower part. This partially took away from the sass and spunk exhibited in the Cash/Carter rendition, yet it would be hard to find a duo more suited for the tune in today’s day and age. By this time, the crowd was on its feet, and contrary to the theme of the song, there were no signs of the fire burning out between this inimitable duo. To the contrary, I left the venue feeling downright “bona fide.”