Trending Stories from The Marquee
You are at:Home»Features»Mosey West
By Marquee Magazine on September 1, 2011 Features, Interviews 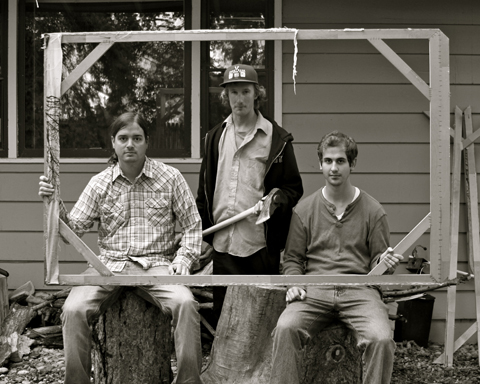 The members of Mosey West unknowingly put their lives into fast-forward when they entered The Fresh Cuts Challenge last February. Since winning the challenge with their single “Cold Prediction,” the 10-month-old, three man band from Fort Collins has spent hours in the studio claiming their victory prize — a no-money-down EP compliments of the contest’s sponsors, United Interest (UI) Sound Studios in Boulder and The Marquee. Months of hard work and one name change later, Mosey West — formerly called The Living Rooms when they entered the contest — prepares to proudly release their five song EP Vaca Money next month.

“Winning the contest was like a big speed boost,” said drummer Matt Weitz in a recent group interview with The Marquee. “It’s like what we would have done over a year.”

“Or two years, really,” part-time lead vocalist and guitarist Adam Brown added. “We have all these songs, but we don’t have money to record them.”

In fact, they have about 30 original songs between two songwriters. Brown and bassist Mike McGraw share both the pen and the microphone. “We started from the get-go playing no cover songs,” Brown said. “We just taught ourselves songs we had already written. From there, we are writing songs more together and in our own style.”

While winning the Fresh Cuts Challenge unexpectedly sped up Mosey West’s career, the chance to record a handful of their originals at no cost has, not shockingly, been a welcomed luxury.

The Fresh Cuts Challenge was a two-step process. First, bands had to submit a demo single to The Marquee and UI Sound Studios. Only three singles were chosen out of the close to 100 entries  to be professionally recorded. After the singles were recorded, the final three bands were at the mercy of online voting.

“I remember being stoked about ‘Cold Prediction,’” said McGraw. “I was like, ‘This song is going to win.’ I was saying we were going to win the whole time.”

McGraw’s confidence, however, did not stop the band from shamelessly — in the words of Weitz — “hustling” anyone within reasonable range of a computer. Their hard work clearly paid off because at the end of April, Mosey West was informed that they had captured the majority of the nearly 2,000 votes that were cast.  “I guess we do have something going for us,” Brown said. “We do have a sound, or someone else likes it besides our girlfriends or our moms.” Shortly afterwards, Brown, McGraw and Weitz found themselves working closely with UI Sound Studios Producer Evan Reeves and Engineer Ben Romsdahl in order to capture their unique and developing sound.

“Mosey West’s music is raw energy that you do your best to harness,” said Reeves. “Sometimes the sound struck like unpredictable lightning; but on those special occasions that you hear on the album tracks, it was thermionic emission.” The band plays a little bit of rock and roll, folk and blues mixed with alternative country, but all of their music has roots in traditional Americana.

Mosey West’s sound on the upcoming EP Vaca Money was also partly affected by the vintage equipment used in the recording. Brown found heaven in the studio while he played a ’69 Telecaster and sang into a plethora of vintage microphones. McGraw was more excited about a recently repaired ’67 bass he found broken in the trash as a kid, and Weitz played an 1800’s cocktail piano for one track.

“I think we got more of an old school, early ’70s vibe than we would have gotten using our own gear,” said Brown about the sound. “Some of the songs took about four takes that we cut pretty much live and then pieced together,” he added. “So a few of the songs have a really live feeling to them.”

After many late nights, or early mornings rather, Mosey West has a finished product. Months in the studio has left the band’s songs relatively unchanged,

compared to the original arrangements. In fact, the band was more affected by the experience than their music — a good sign. “We are producing ourselves more,” Brown said, but McGraw pretty much summed everything up: “I’m going to be proud of it.”

• Ryan Adams and the Cardinals