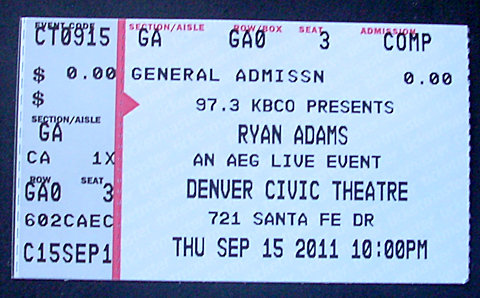 With a zero-notice announcement, an immediate on-sale (and sell-out), and a teeny, tiny venue, Ryan Adams tickets became some of the most coveted pieces of card-stock in Colorado this week.

And it was worth every panicked second of anticipation.

When the rumblings of this last-minute show started on Monday afternoon, the news of the announcement was quickly followed by the question “Where the hell is the Su Teatro Theater?” The 300-seat venue is in the heart of the Santa Fe Art District, and is known more for cultural programs than for music, but that may change after word about this show begins to spread. The relatively non-descript exterior and lobby of the building, give way to a very tasteful and ample reception area with a modern, almost minimalist design flare. The theater itself however is dark, with old-fashioned thick velvet seats, that bring to mind college lectures and community theater thespians.

The place was pulsing with a subdued, calm excitement that seemed like it would burst at any moment. The 300 people lucky enough to get tickets weren’t just your average fans. Su Teatro was packed with super fans: women who know every quirk about Adams, dudes who can rattle off setlists from Adam’s former bands Whiskeytown, The Sweetheart Revolution and The Cardinals, and people of both sexes who sigh dreamily after nearly everything the guy says.

Just after 10 p.m. Adams took the stage, and immediately the audience hushed. Turns out, having a super fan crowd in a small theater is a formula for a perfect listening environment. It was quiet enough that when an audience member sneezed, as Adams was tuning, the artists was able to whisper a “bless you” to the fan without the aid of a microphone.

That intimacy was what made this show so spectacular, and the fact that everyone respected it, made it even more special. Without raising their voices, audience members could directly communicate with Adams, and there was no doubt as to whether or not he was hearing them. Several times throughout the night, audience members would voice song suggestions, or holler little comments. But luckily, no one tried to dominate the conversation, or take advantage of the situation.

Wearing a long-sleeve Merciless Fate t-shirt, and cradling his 1970’s Buck Owens’ acoustic, tri-colored guitar, Adams opened the show with a stunning version of “Sweet Carolina” off his 2000 solo debut Heartbreaker. He then played the title track off his upcoming October release Ashes and Fire — a track that could have easily been released on Heartbreaker. There’s a country-twang to the track, a sort-of two-step feel, blanketed by Adams’ trademark bittersweet lyrics and delivery.

Adams took on two of his more standard tracks next, “If I Am A Stranger” and “Damn, Sam (I Love a Woman That Rains).” The opening two or three notes of “If I’m A Stranger” started a funny exchange between an audience member and Adams. He had barely lifted his fingertips from the fret of the second note, when a woman in the audience gushed with approval of the song selection. He stopped and laughed, saying, “There’s no way that you know what this song is from those notes.”  While Adams’ music may fall closer to Neil Young’s’, he’s never hidden his love for metal music, and he joked with the woman that,” It could be Queensryche, right there.”

“Damn Sam” gave way to another new track, “Invisible Riverside,” which features the lyric “Don’t let go, don’t change your mind/The stars fall into the oceanside/someone pull the ribbons from my eyes, free my soul, let it roll away, like an invisible riverside. “

“Let it Ride,” which under The Cardinals had tuned into a pretty rocking track, was taken back to it’s acoustic roots last night, but it was one of the few songs where the Cardinals were truly missed.

Adams then put down the Buck Owens guitar and moved to the piano for a moving rendition of “Sweet Little Gal (23rd/1st).” Back on guitar he played “Desire” off of 2002’s Demolition, followed by another new track “Dirty Rain,” which he dedicated to “my man,” Bill Murray.

“Everybody Knows,” “Please Do Not Let Me Go,” and yet another new track, “Lucky Now” followed, before Adams played what may have been the best guitar work of the night. On the track “Amy,” Adams kind of went nuts, or as nuts as you can on a slow tempo track like that. He was throwing in massive amounts of finger picking riffs and took what is a bit of a sleeper song and truly transformed it into a very intricate piece.

It was about this time in the show, however where the heat of the crowd in the small confined space became a bit of an issue. The stale air laid heavily over the crowd, and I was happy to learn later that I wasn’t the only one, who nearly fell asleep in the sauna-like atmosphere.

Back on piano, Adams played a very mellow version of his hit “New York, N.Y.” and a very heart-felt rendition of “Blue Hotel.” “To Be Young (Is To Be Sad)” and “Firecracker” followed before another new track, “English Girl Approximately,” before ending the very ample set with “Carolina Rain.”

Adams told the crowd he was going to get more tea, and exited the stage, which allowed the crowd stretch their legs and steal a bathroom break, but the real treat was that theater staff opened the doors to allow fresh air into the hot, stagnant room.

With train whistles coming through the open door, Adams returned to the stage to play “Jacksonville Skyline,” an uber-soft version of “16 days,” and “This House Is Not For Sale.” He picked the tempo back up slightly for “Rescue Blues” and “Two” and capped the evening with the crowd favorite “Come Pick Me Up.”

There are tons of shows that I’ve seen over the years that I can truly say I’ve been honored to attend, but this one may go down as one of the most magical. The intimate setting, the lack of easy tickets, the environs of a theater few people have ever heard of, and an absolutely perfect crowd all worked together to make this one of the most special shows I’ve ever seen.

It leads me to think that this could not only be the first of many shows at this theater, but also to the idea that this is a phenomenal way for the music industry to breathe new life and excitement into concerts. Had Adams played the exact same set, with the exact same crowd at the Paramount Theater, or some other Denver locale, the evening just simply would not have been as enthralling. Taking a bigger name, and putting them in a tiny room gives the audience the feeling that they’re sitting in that artists living room, watching them play, and it’s an experience that every super fan wants.

It was a brilliant, brilliant night, and an intense amount of foreplay for Adams upcoming release Ashes & Fire, due out October 11 on Pax-Am/Capitol.

If I Am A Stranger

Damn Sam (I Love a Woman That Rains)

This House Is Not For Sale