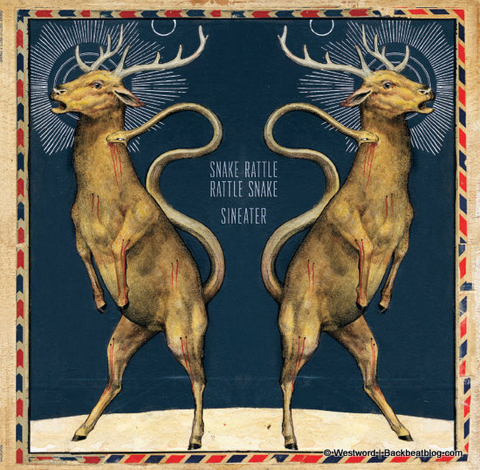 For more than two years, Snake Rattle Rattle Snake have been the darlings of Denver. “Best New Band” by Westword? Yep. Top finisher of the Denver Post Underground Music Showcase poll? Done. But in addition to taking home accolades, the band has been a model of solid DIY ethics, with smart heads on their shoulders to handle the ever-important offstage part of the business.

So the only question that remained of the band, who had only released an EP to date, was how Snake Rattle Rattle Snake’s debut would stack up.

Not surprisingly, they’ve hit another home run, in what is already a long list of accomplishments for the still young group. Filed under “indie” but more of a blend of melodic psychedelic post-punk and dance rock, Sineater opens with “Hastily,” a percussive cymbal ride almost indicative of the group’s namesake getting ready to strike. As the bass-driven melody takes hold, vocalist Hayley Helmrick’s vocals begin pulsing through the rhythms like venom through the bloodstream. At times sounding like Sinéad O’Conor — not “Nothing Compares to You” Sinéad; more like “Jerusalem” Sinéad — and at other times coming across like the stoner pop songstress Nichole Gehweiler of The Comas, Helmrick’s haunting vocals both punctuate the melody while also beautifully wrapping around it, which allows the vocals to both lead, and support the dark rock.

“Hastily,” one of the few songs from the band’s EP that made it onto this release, gives way to “NOPD,” an epic sounding climb that opens up to the heavy-beat and catchy verses of “Kafka and the Milk” — the only other song from the band’s EP.

The remaining eight tracks are songs that the band has been playing live for some time, but are no less enthralling. And that’s truly the only downside to this release — the lack of any brand new material from the band. But the group said that the goal of this album was to document what their songs have become, and in that regard they have again wildly succeeded.

In addition to being a debut for Snake Rattle Rattle Snake, the album is also the debut of the new Denver label/collective Greater Than, which was founded this year by Virgil Dickerson of Suburban Home Records, musician and journalist Andy Thomas and Colorado burrito king, Pete Turner of Illegal Pete’s. The three partners started working together feeding bands through Pete’s Starving Artist Program and with the new label seek to help DIY bands by filling in the missing pieces they need — almost providing an a la carte approach to everything from booking or publicity to licensing and management.    — Brian F. Johnson