Trending Stories from The Marquee
You are at:Home»Cover Story»Vetiver and Fruit Bats
By Marquee Magazine on September 1, 2011 Cover Story, Features, Interviews, Timothy Dwenger 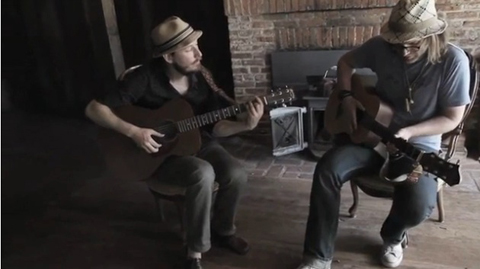 Typically, when two good friends head out across country together it’s on a road trip or some kind of vacation. This month, however, when two Sub Pop bands embark on a co-headlining tour, longtime friends Andy Cabic of Vetiver and Eric Johnson of Fruit Bats, will be sharing a bill, and perhaps a van at times, at the helms of their own bands.

“Eric’s one of my closest friends,” Cabic said when The Marquee caught up with him as he worked in the studio of his longtime friend and producer Thom Monahan. “We have done several tours together, both tours where we’ve been out as Vetiver and Fruit Bats, and when he’s played with me in Vetiver. So I’ve known him for years.” While the two have shared a friendship and some stages over the years, it was only recently that their musical lives became more intertwined, when Johnson followed his friend’s lead and booked some studio time with Monahan to record the fifth Fruit Bats album, Tripper.

While Cabic has worked with the nearly legendary indie folk producer on each and every Vetiver record so far, including the recently released Errant Charm, Johnson had only been in his studio as a sideman. “I got to know Thom through Andy [Cabic], and because I had worked on the last couple of Vetiver records. But Thom was another one of those through-the-grapevine, multiple friend shared 100 times over, kind of people,” Johnson said, in a separate interview. “I had been a fan of his work beyond Vetiver, and even before I knew those guys I had been a Lilys fan, and a Pernice Brothers fan, and loved that second Beachwood Sparks record. He’s kind of made a name producing these kinds of folky, or rootsy, bands, but I also know that he is a synth nerd and knows about very outer spacey, futuristic sounds, so I thought that was going to be a good match and it was.“

As he set to work on Tripper with Monahan, Johnson found himself straying from the sunny, guitar-based sound that had dominated many of the early Fruit Bats records and leaning more heavily on synthesizers and vocal effects that serve to darken the overall feel of the songs a bit. The resulting album is very mature sounding as it reflects themes of loss and change that wash over an almost melancholy soundscape.

Vetiver’s new record, Errant Charm, on the other hand, is the most summery and poppy album that Cabic has released to date. With tracks like “Hard To Break” and “Wonder Why” shimmering with sunny, California pop sensibilities that almost beg for a late afternoon picnic on the beach, Errant Charm serves to welcome die-hard Vetiver fans into the brave new world of the band’s future.

While both Errant Charm and Tripper share some common ground, it’s a real testament to Monahan’s skill as a producer and as a creative partner that the records are so different. “He is very talented and has a real skill for arrangements and recording and editing,” said Cabic about the way that Monahan works in the studio. “He’s a great facilitator in the sense of helping to get ideas out quickly and confirming or disconfirming any concerns as you are going along. He’s a safety net because he is so skilled he is able to help realize musical ambitions.”

Although Cabic and Johnson have been on the road together in the past, shared the stage as members of Vetiver, and now share a producer, the September tour marks the first time these two friends are sharing a co-headlining tour together in the States. As a result, it would seem fitting that there be some cross-pollination between the two during the shows and from what Johnson had to say, it sounds like that is exactly what they are planning. “It will be a full set from each band and then we will probably form a pretty serious super group,” said Johnson. “We are working up some sort of big Concert for Bangladesh style jam, so there will definitely be interplay between us.”

So whether it’s the Fruit Bats set, the Vetiver set, or the “Fruitiver” finale that seems the most intriguing, this show is bound to wow the loyal fans and convert the uninitiated all at the same time. Each band blends folk, pop, and indie weirdness in their own way and they have harnessed and built careers on sounds that are at once very different and yet eerily similar. It’s no wonder that they have been friends for so long and eventually gravitated to the same producer.