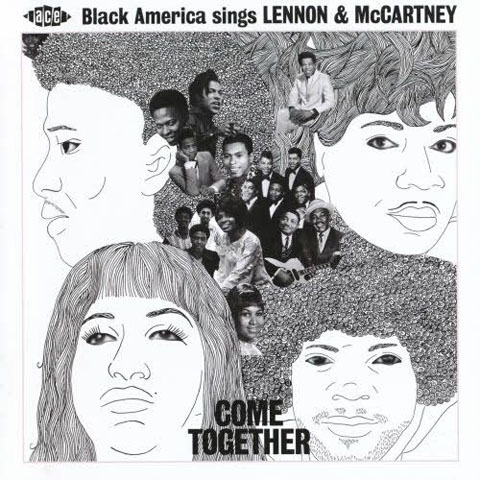 I stumbled across this Ace Records compilation by accident while doing my weekly Google-search on The Beatles (yes, I know I’m obsessive). After acquiring the CD I have to say, this is probably the compilation release of the year thus far. Fans of soul music, Motown beats and The Beatles will absolutely love this stellar album.

It’s probably safe to assume The Beatles have been the most covered band in the history of popular music. You’ve probably heard a gazillion Beatles covers yourself by a wide variety of different artists in varying musical styles — from the Grateful Dead to Celine Dion, for example. What makes Come Together: Black America Sings Lennon & McCartney so special is the album’s focus on tracks by the leading names in soul music from the ’60s and ’70s. More importantly, these tracks are vintage — actually recorded in the ’60s and ’70s.  Because of this, the compilation follows a common stylistic thread and it sure is fun as hell — it’s basically a beginner’s guide to American soul and R&B.

From the album’s intro drum beat of Chubby Checker’s rambunctious “Back in the U.S.S.R.,” it’s clear to see that some hidden gems are going to be exposed. The list of contributing artists is staggering: Fats Domino, Aretha Franklin, Otis Redding, Little Richard, Lowell Fulson, Billy Preston and Mary Wells, just to name a few. I was probably most surprised by a few of the random covers I had never heard, including Wee Willie Walker’s upbeat “Ticket to Ride,” Black Heat’s “Drive My Car” and Roy Redmond’s “Good Day Sunshine.” It’s simply one of those albums that you can just let play through.