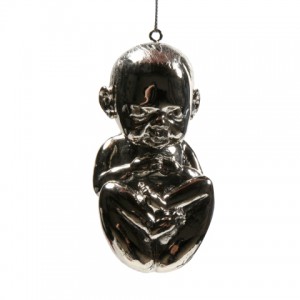 Originally made in 2009 to coincide with the band’s album Embryonic, the silver trembling fetus Christmas ornament has been re-released this year, as if it were a slab of vinyl. The 3” tall ornament, claims lead Lip Wayne Coyne, is forged from an exotic metal that appears to have come from outer space. Coyne also contends that the ornament is rumored to give off vibrations that help all humans progress toward intelligent explosion, and it has the potential to make you smarter.