Trending Stories from The Marquee
You are at:Home»Album Reviews»Sigur Rós
By Marquee Magazine on December 1, 2011 Album Reviews, Brian F. Johnson 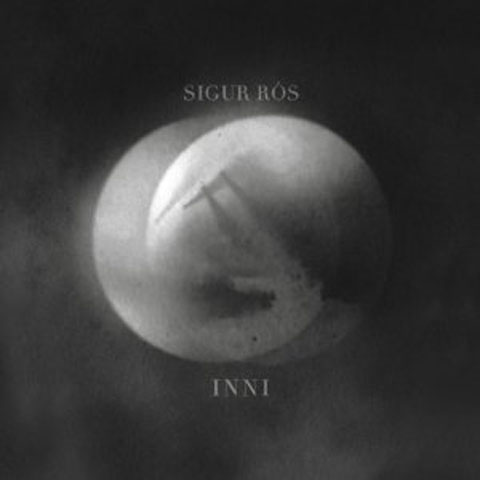 It’s almost too perfect for a live album. It’s literally astonishing that this sound wasn’t created by layer upon layer of studio efforts.

For anyone who was disappointed when Sigur Rós announced a hiatus, or was left wanting more after frontman Jónsi’s all-too-brief solo appearance in Denver last year, Inni has arrived to satisfy — even if only temporarily — the Jónsi jonesing.

The release — both a film and an album — was culled from Icelandic post-rock masters Sigur Rós’ final concert in London, before the band went on break, and is available in a staggering array of editions. There is a digital edition with the film in mp4 format and the album in wav or mp3, a “standard” edition with the film on DVD and music on a double CD, a “Blue-Ray” edition, a vinyl edition with the film on DVD and the music on three slabs of vinyl, and a “Limited Special Edition” featuring a Blu-Ray disc, standard DVD and double CD, as well as a colored 7” vinyl featuring the song “Lúppulagið,” and additional bonus material.

Whatever the format, though, be prepared for the definitive Sigur Rós experience. The only way it could get better is if the band were playing in front of you — and we still don’t know exactly when that will happen again, but that aforementioned 7” does provide Sigur Rós’ first new track in years, “Lúppulagið,” a previously recorded, but unreleased track.

It’s difficult to tell if the crowd at this London show was incredibly reverent and well-behaved during the show, or if they were turned down in the live mix. The CD almost sounds as if the band is playing to an empty stadium at times, and the mixing is such that while you don’t hear environmental reverb, there’s something about the performance that makes you feel as if sound is bouncing all around you constantly — almost drenching you in echoes.

With a total of 15 songs, the lion’s share of which are from the band’s highly acclaimed 2008 release Með suð í eyrum við spilum endalaust, the concert spans the band’s entire catalog, and while that would come across alarmingly for most bands, the music of Sigur Rós throughout their career easily sequences and blends with each passing album and movement. Simply put, the men worked on their setlist to make this flawless.

For those not familiar with Sigur Rós, their ambient post-rock is, at times, akin to tantric sex. It’s not immediately goal oriented, instead it’s like a long, passionate connection that organically pays off in eruptions of climactic bliss. One of the best examples of that is the song “Festival” and this live performance is an incredible rendition of the song. Jónsi’s soaring vocals softly enter the seven-minute song and slowly build for two minutes, until he holds a gorgeous note for an astonishing 50 seconds, all before the group launches into one of their most recognizable and rocking pieces of symphonic pop. As the song blares, it’s almost impossible to not think of the piece as a final encore, but the band pulls out another 23 minutes over three more songs.

The real magic of Sigur Rós is their ability to be simultaneously tender, sparse and pin-drop quiet, while also being as eruptive as the Icelandic volcano Eyjafjallajökull — and the fact that Jónsi is able to sing so angelically amidst all of this is awe inspiring.

According to internet lore, after a screening of the film at the Venice Film Festival earlier this year, the band did hint that they would tour again in 2012. Later, after another film festival, bassist Georg “Goggi” Hólm promised that 2012 would “be a very busy year” for Sigur Rós. Regardless of when in the year that happens, Inni should more than satiate even the most starving Sigur Rós fan. It’s a truly phenomenal live album.       — BFJ