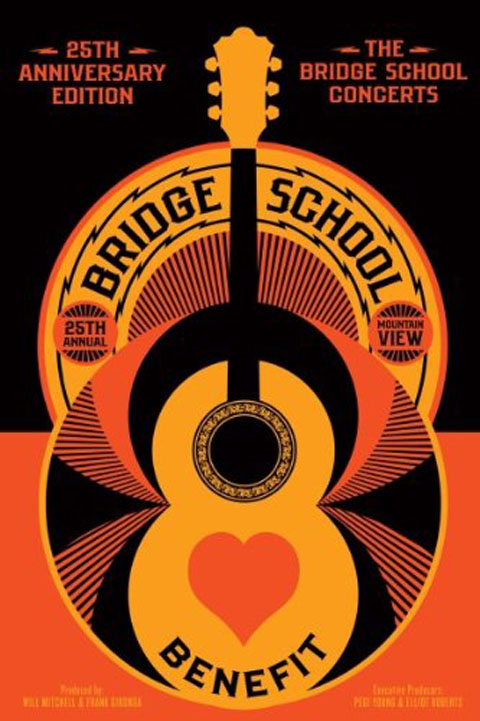 The sheer diversity of artists, the rarity of these live acoustic tracks, and the testament to what these performances stood for, make nearly every note of this anniversary collection incredibly enjoyable.

The Bridge School Benefit concert, held each October in Mountain View, Calif. at the famed Shoreline Amphitheatre, started in 1986 when Neil Young and his wife, Pegi, started the school for children with developmental disabilities. The couple, who hadn’t found a school that fit the needs of their then young son, started their own school that has changed the lives of countless students over the last quarter of a century.

Amidst all of the hard work of developing and continuing a school of this magnitude and reach, there is one day every year that, in addition to bringing much needed funds for the school, also results in a wealth of fun for everyone, and this two CD release (which is also available as a three DVD release) is a snapshot into those magical nights of music.

Starting with an admittedly dated rendition of Bruce Springsteen’s “Born in the USA,” the CD features tracks by The Dave Matthews Band, Fleet Foxes, Sonic Youth, Pearl Jam, Gillian Welch, R.E.M., Willie Nelson and others, and that’s just the first disc. Disc two features performances by Paul McCartney, Elton John and Leon Russell, Band of Horses, Metallica, Brian Wilson, and The Who, among others; and, of course, throughout the collection Neil Young sits in on different songs.

One of those phenomenal moments includes Young sitting in with the recently defunct R.E.M. on the very poignant “Country Feedback.” As R.E.M.’s Michael Stipe sings “It’s crazy what you could have had, it’s crazy what you should have had, I need this, I need this,” one can’t help but think of the Bridge School students in the crowd, who clearly did “need this” event. Norah Jones’ version of the Wilco song “Jesus, etc.” is another solid highlight, and Metallica’s version of “Disposable Heroes” gives listeners an idea what the metal gods would sound like if someone hi-jacked all of their amps for a night.

Even if it weren’t for a good cause, this collection would be an impressive artifact, but the fact that it helps benefit a school that has helped so many children and their families, makes this set an absolute must-have.                          — BFJ