Trending Stories from The Marquee
You are at:Home»Album Reviews»Re:Generation
By Marquee Magazine on January 1, 2012 Album Reviews, Brian F. Johnson 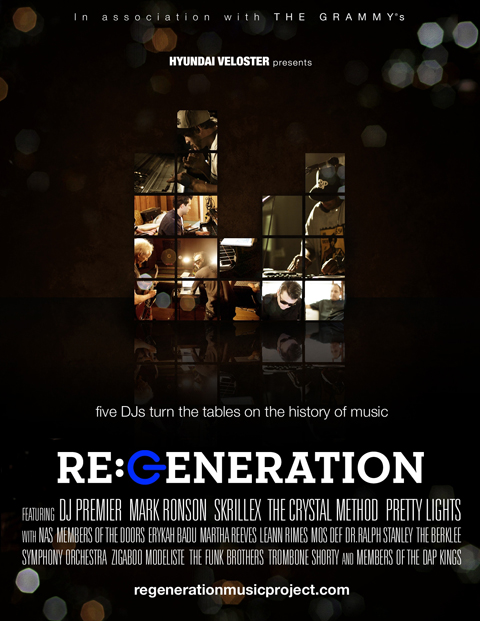 Five DJs Turn The Table of the History of Music (film)

There are a myriad of sounds in this world that were never intended to go together, but if electronica has shown anything during its meteoric rise to popularity, it’s that sounds that weren’t meant for each other, sometimes work in conjunction as wonderfully as chocolate and peanut butter.

The new film Re:Generation, directed by Amir Bar Lev, forces seemingly disconnected musical genres together the way kids wantonly pair Lego pieces that weren’t ever meant to fit with one another.

In this feature length documentary, Lev puts together a superstar lineup of electronica producers with a superstar lineup from other genres, and sets the stage for the creation of new music by having those producers write and record brand new tracks with a grouping of influential collaborators from that genre. Simply put, Lev is not only pairing together different genres, he’s also pairing together different generations.

DJ Premiere puts rapper NAS in front of the Berklee Symphony Orchestra. The Crystal Method is paired with Martha Reeves of the Vandellas and the Funk Brothers. Mark Ronson is hooked up with Erykah Badu, Mos Def, Trombone Shorty and members of the Dap Kings and Zigaboo Modeliste. Skrillex teams up with Ray Manzarek and Robby Krieger along the Venice Boardwalk in Los Angeles and then later collaborates on “Breakin’ A Sweat” with John Densmore for what will amount to the first original recording featuring members of The Doors since An American Prayer was released in 1978. Did you catch that? An electronica documentary is responsible for producing the closest thing we’ve seen to new Doors music in more than 30 years! And finally, Fort Collins’ own Pretty Lights (aka Derek Vincent Smith) finds himself in a Nashville studio with the legendary bluegrasser Dr. Ralph Stanley and Le Ann Rimes.

That pairing in particular, Pretty Lights and Dr. Ralph Stanley, is, I think, one of the most interesting pieces of the film. Smith says in the movie the that he got a sort of “standoffish vibe” from the musicians he was paired with and there’s a palpable awkwardness that the film reveals as Smith stands in front of the Nashville session artists there to accompany the recording and talks to them about the project — the entire time, speaking and moving, almost as if he’s rapping. He said that he thinks those musicians were probably saying to themselves: “Who’s this dude with the baggy pants and the slightly sideways hat looking like a… This guy is a producer?” Smith goes on to admit that he had a “hard time visualizing a fusion of my style with that sound.”

There’s almost a lack of reverence by Smith for Stanley that is captured in the film, when Smith asks Dr. Stanley to put a bit more of a Burl Ives melodic spin on the classic tune “Wayfaring Stranger.” The short in stature Stanley looks up at the towering Smith and simply, but powerfully says, “I’d rather just do it my way.”

However, despite those awkward moments, Smith goes on to produce a fantastic modern spin on the old classic song. Stanley’s haunting voice, coupled with a high and twangy, pulp fiction adaptation by LeAnn Rimes, all overtop of an incredible club beat, and mixed with ample slide guitar licks is a perfect example of blending genres and generations — precisely what Re:Generation set out to do.