Trending Stories from The Marquee
You are at:Home»Features»The Motet pulls musical costumes back out for best of halloween shows
By Marquee Magazine on January 1, 2012 Features, Hap Fry, Interviews 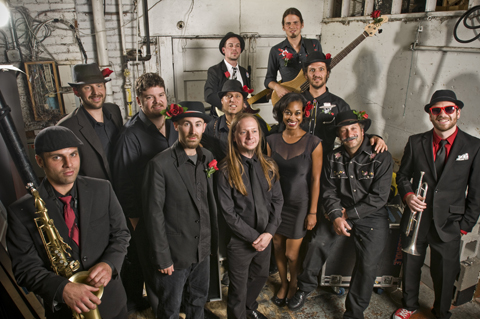 The wide array of musical costumes The Motet has donned over the years never has had a chance to get all that dusty.

Throughout its history, the Colorado-based improvisational band that encompasses jazz, electronica and funk, among other genres, has played the role of The Talking Heads, Madonna, Earth, Wind and Fire, Tower of Power and many others on and around Halloween. For the past few years, the group has brought them all together in January for a “Best of Halloween” show.

“We’ve done it a few times,” Dave Watts, the band’s drummer, producer and founder, said during a recent phone interview with The Marquee from his home in Golden. “It actually started at Cervantes’ about three or four years ago. It just kind of makes sense. I mean, we spend all this time on this material every Halloween that it doesn’t make sense to have it go by the wayside, and it gets better every time. We get better at arranging these tunes, and then we’re able to bring in some more obscure stuff. We have a huge pile of material to work with, and there’s a lot of great stuff in there. We’re able to put so much energy into it. It’s a lot of fun.”

The Motet paid homage to the Grateful Dead this past Halloween with “Funk is Dead” performances in Boulder, Denver and Fort Collins. “Funk is Dead” will continue “Truckin’” into 2012 with a one night performance at Cervantes’ on January 27, before playing their annual “Best of Halloween” show the next night at the same Denver venue. The Motet also is set to play “Funk is Dead” gigs along the East Coast and appropriately in San Francisco this year.

Watts said the group’s newest musical costume was one of the more challenging ones the group has had to fit into since the group began covering bands in 1998 with The Beatles.

“This one was one of the hardest ones because we really spent a lot of time rearranging the material and trying to work it into a way that sounded good,” he said. “We knew we had to do it right or there would be a lot of disappointed people. We definitely spent some hours in the rehearsal studio.

“There is a lot of homework that needs to be done beforehand. I spent many weeks putting together charts, recordings and all that stuff – just getting it out to everybody and making sure everybody is aware of their part,” Watts said.

Because of the well-reviewed and received Halloween shows the group has played over the years, sometimes it is easy to wonder if the band is worried that their accomplishments as a “costumed” band will overshadow the legacy they’ve built as original artists. But whether playing covers or their own original material, The Motet always has been an improvisational act first and foremost and in all aspects, not just the music. In fact, as Watts believes, it really is hard to place a consistent label on the band that continues to fluidly change itself as times and gigs require it to.

“I think it’s a good thing for people to associate anything positive with The Motet just as long as people are aware that it’s a great experience for everyone involved,” Watt said. “I have no problem with whatever association is out there. I mean, I think we’re a lot of different things to a lot of different people, and we’ve always been that way. It’s been frustrating for some people when we show up without a vocalist or when we show up and we have three vocalists. But I think people are finally realizing that it’s never one thing. As long as they can accept that, then everything else is cake. It’s always going to be fun to play music with lots of improvisation. That’s always going to be there. We’re body music.”

More big things could very well be in store for The Motet in 2012. In addition to their two-night run at Cervantes’, shows along the East and West coasts and a private run in Costa Rica early this year, Watts has hopes that the group will be able to produce its first album since 2009’s Dig Deep.

“What I’d like to do with the guys, as far as recording goes, is just have some sessions where we just improve and work out our ideas in the studio and just create,” Watts said. “I’d really like to put a nice record out that way. The last couple have been me putting together ideas and then having the guys come over individually and then just tracking everything. That’s a pretty great way to make an album because you can really get into a specific part, but there’s something to be said for the group-creative input.”

• Sly and the Family Stone