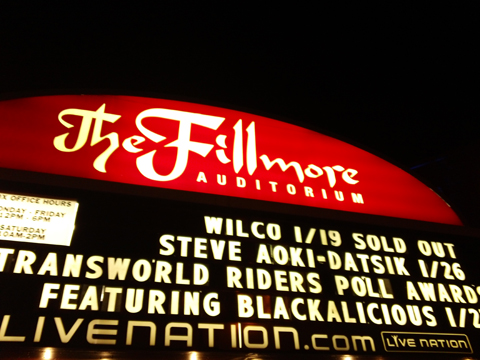 The Cheeba Chew hadn’t even begun to kick in yet, but my mind was already playing tricks on me.

I was at the back bar of the Fillmore, and partially due to my bad eyesight, but more so due to the overwhelming amount of Wilco gear on stage, it took me half of the first song to realize that there were only four members of White Denim on stage. But it sounded like a dozen musicians or more.

The only thing I could really see was lead singer and guitarist James Petralli, who, at least from my distant vantage point looked like a tall skinny version of Ryan Adams — the scruffy look that Adams sported around the time of his Cold Roses release. (For the record: I’ve since looked it up and Petralli and Adams look nothing alike).

Ironically, though, the Austin-based, self described “fusion” band sounded a bit like Adams’ band, The Cardinals, but more precisely, like The Cardinals going off the rails.

With a massive and cavernous sound White Denim immediately began destroying the ear drums of the quickly gathering sold out crowd. Crushingly loud, the group’s first song was nearly seven minutes in length, and while some sound problems plagued the early parts of the set, White Denim barreled through them like a freight train.

The band’s mix of time signatures and treble heavy guitar attack once lead Spin to say that White Denim makes Austin sound like a Brooklyn art opening. Its post-rock with a pulse, or maybe an Arrhythmia, is more accurate. Several times during the set, White Denim’s ample use of time changes seemed to explain clearly why they were chosen as a Wilco opener, but there were also times when those sounds were  competing with one another, rather than complimenting each other.

The precisely timed half hour set, did make for an intriguing introduction to the group. Sound issues aside — and maybe actually because of them — I’ll be downloading White Denim’s newest releases (their fourth LP D, and their EP Takes Place In Your Work Space) today, to hear what they really sound like.

Wilco didn’t draw out the break very long, and quickly took to the stage, which was adorned with decorations that could best be described as a large-scale version of an elementary school classroom at Halloween. Remember the “ghosts” we all made in our young days, with toilet paper, a crumpled piece of paper and a little piece of string? Well hundreds of those, that could have been measured in feet, rather than the elementary school inch-sized ones, hung from the ceiling. While lights positioned behind the “ghosts” changed their color throughout the night, they were at their coolest when they were bathed in purple, which almost made it seem that they were reflecting light from the Fillmore’s famous chandeliers.

With his huge and ornate Gibson acoustic strung around his neck, Wilco’s Jeff Tweedy started the show with the slow strumming of “Poor Places,” but  the delicate opening of the set was not indicative of things to come. As “Poor Places” disintegrates into Wilco meltdown, the band made it relatively clear that the energy on their tour-opening show was going to be extreme.

From the meltdown of “Poor Places” came one of the best and most “wilco-ey” Wilco songs in recent years, the incendiary “Art of Almost” from the band’s newest album The Whole Love.

With the lyrics “I’ll hold it up,  I’ll shake the grail,  disobey across the waves,” Tweedy and company plowed into the climatic sonic assault of “Art of Almost,” building with frenzied distortion and guitarist Nels Cline showed his form as one of the most enthralling tweakers ever on stage.

Cline’s frantic style, coupled with Tweedy’s charismatic and always self-deprecating persona, as per usual, were the highlights of the show, but the less attention grabbing members of Wilco — drum virtuoso Glen Kotche, bassist John Stirratt, keyboardist Mikael Jorgensen and multi-instrumentalist Pat Sansone — unceremoniously work together to not only give Tweedy and Cline their platforms, but to make Wilco one of the most intriguing bands of our time.

On his own, Tweedy’s songwriting is pure poetry, and while his acoustic solo shows can highlight that delicate beauty, it takes the full force of the sextet to punctuate the power of those lyrics.

One of the lighter moments of the show though, came just over a half-dozen songs in, when Tweedy asked the crowd, “Is pot legal here? Sort Of? Somewhat? It smells legal. It smells very, very legal.”

Later in the show, Tweedy made the proverbial altitude comment, saying that he “felt it in his haunches.” But his symptoms must have been more beneficial than negative, though, because the band turned in one of their strongest Denver performances in years and a blistering kick off to their 2012 tour.

Can’t wait til they come back again.

4. Side with the Seeds

5. I’m Trying to Break Your Heart