Trending Stories from The Marquee
You are at:Home»Brandon Daviet»Megadeth
By Marquee Magazine on February 2, 2012 Brandon Daviet, Features, Interviews 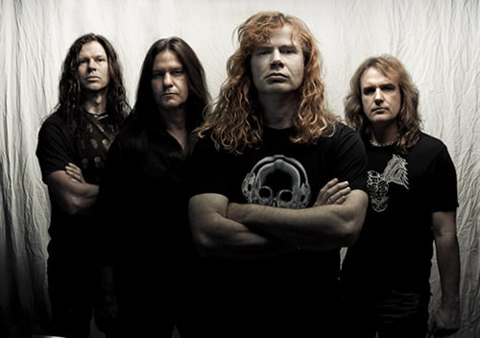 I, for one, could not imagine a musical landscape without Megadeth. The “what if” scenario of Dave Mustaine staying in Metallica at the dawn of thrash music has just never made sense to me. While I will give Metallica their due as formable musicians I have always viewed Megadeth’s razor sharp musicianship and caustic politically charged wit as a far more valuable asset to the annuls of thrash and heavy metal than Metallica’s visions of sugar plums and other dreamtime inequities.

Still, from the perspective of financial success and mainstream achievements it is easy to see how Metallica’s domination of the airwaves and record charts could create a metaphorical hurdle that even Dave Mustaine himself has admitted to wanting to overcome. And that drive have contributed, often for the better, to Megadeth’s unrelenting ferocity onstage and off.

It was just recently, and a long time coming at that, that everything came full circle when Mustaine joined his former Metallica band mates onstage in San Francisco to perform a handful of songs that’s he had helped them write. That finally brought closure to the lingering “what if” question — what if, Mustaine rejoined Metallica?

It’s important to note this performance wasn’t some handout from the boys in Metallica to a fallen or unsuccessful former member, as Megadeth is still stronger than ever. In fact, Megadeth are touring with their very own handpicked lineup called “Gigantour” and are riding high with their thirteenth studio album, aptly named, 13. On this outing Megadeath are sharing the stage with the legendary Motörhead.

In addition the band has also welcomed back the only member that ever came close to being a true musical partner to Mustaine; bassist Dave Ellefson and has two relatively new members Shawn Drover and Chris Broderick who provide enough fresh blood to keep the newer fans interested and keep the older fans from calling the band a nostalgia act.

The Marquee recently had a few words with Broderick, who was born in Colorado and serves as the band’s lead and rhythm guitarist, about the current state of musical force the planet calls Megadeth.

Being the “new kid town” in terms of band tenure Broderick provides a unique prospective into the workings that is, in many ways, has always been more Dave Mustaine centered than any sort of collective effort. In terms of Ellefson rejoining the fold, Broderick said, “It was an amazing thing to watch, it was like an old friendship come back to life and I saw the old camaraderie between them blossom again.”

Broderick has only been with the band for two albums including the current release 13 and the band’s previous effort Endgame. Both albums have a large share of Megadeth’s trademark political dirge’s, something that Broderick, who is best known for his time in Jag Panzer, found refreshing, “I had explored political themes on my own, musically, but not to the extent that Megadeth does especially not lyrically,” Broderick said.

Meagadeth’s life blood is their bright-line distinctions of the ills of politics today, which spawned the Grammy nominated release 13. The album has its share of that with tracks like “Millennium of the Blind” and the jarring condemnation of “Whose Life is it Anyway.” Oddly enough, it is one of the less political relevant tracks “Public Enemy #1” that garnered the attention of the nominating committee. “I don’t know who picks these things, and getting a nomination is great, but ultimately what matters to me is what the fans and the people that actually listen to us a band thinks, that’s what matters to me,” Broderick said.

Another reality that often crosses the minds of many a longtime fan of a band like Megadeth is “just how long can these guys keep going?” Mustaine already threw in the towel once after he damaged one of his hands while attending, of all things, a sobriety support meeting. On top of that a band like Megadeth just doesn’t exist on simple power chord progressions, it takes a certain amount of physical exertion. But Broderick assures us that the band has no intention of slowing down at this juncture or finding a logical ending point to Megadeth’s story. “I think as a band we are just out there thrashing as hard as we can right now. It is not something we have discussed. If it does happen we will cross that bridge when we come to it as a band but it hasn’t happened yet,” he said.

The idea of keeping Megadeth going full steam is in fact the most logical at this point with many fans and even the Mustaine himself saying that 13 is one the band’s strongest records. For Broderick, a longtime fan before he became a member, the feeling is mutual. “To me it is almost like you can take any of the songs off this CD and put it back in time on any of the other records. For instance, a song like ‘Never Dead’ really fits in with the songs from Killing is My Business…, and then ‘Public Enemy #1’ really to me has that Youthanasia sound,” Broderick explained.

Basically, the moral of this story is that Megadeth are still at the top of their game as well as the top of the thrash metal heap as we blaze into 2012. The time is prime to catch the band live and the fact that it’s bundled with Motörhead is an added attraction should seal the deal.