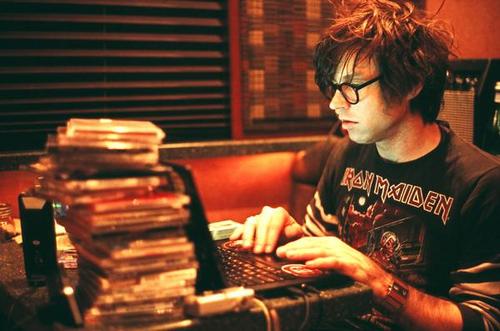 I’ve never ended up with so many tickets to a show I thought I’d be shut out of.

Tickets to the Ryan Adams show at the Temple Buell Theatre were a very hot commodity, at least, until a snow storm postponed the show by a day. But on Saturday, the rescheduled date, tickets started popping up everywhere. I already had one comp in the bag, and I dutifully purchased another so the wife and I could both enjoy the show. But as we waited in line at will call, something I’d never seen before for a coveted show started to happen. Droves of folks entering the atrium were handing away tickets, and some of them weren’t even offering, but more like forcing tickets on people. “Take this” one guy said, literally jamming the print-at-home TicketMaster paper into my hand.

By the time I reached the window to pick up the tickets that were rightfully mine, I had two other tickets in my hand, and I could have had my choice from more than a dozen more.

It’s a shame to think about how many people missed the show that they had been looking forward to. But, postponing the show by a day was indeed the right call after Thursday and Friday’s snowstorm.

While luck had shone on us for ticket quantities though, we had no luck in having seats that were close to one another. So, despite the fact that we had two orchestra level seats in hand, we went all the way to the balcony where we’d be able to sit together. Still trying to get over a cold I didn’t want to be the guy coughing through the whole show, so I moved all the way to the back row, and while I didn’t know it at the time, this was one of my most valuable survival techniques of the evening… well that, and keeping my mouth shut other than coughing.

Adams has never been short on adoring ladies in the crowd, but it seems like since he put The Cardinals to bed, the oohing and ahhing of those fans — their incessant bashful giggling and hanging on every word — has multiplied a billion fold. Those swooning women, coupled with the guys who can’t keep their mouths shut (I have been known to be ‘that guy’ in the past, but not for a long time now), and the proverbial douche bag that has to yell out “Free Bird” at every show (yeah, there was actually one of those on Saturday night… shocking!) has unfortunately grown into this monster that Adams seems to simultaneously thrive on and passionately despise. And Saturday night gave him ample opportunity to do both.

The show started normal enough, with pretty standard versions of “Sweet Carolina,” “Ashes and Fire” (which Adams announced was a song about deserts), and a very quiet version of “If I Am A Stranger.”

And the banter started normal enough as well.  A fan yelled out “Thanks for coming Ryan.” Adams responded, “No, thank you. I fucking love this place. I mean you guys have a gas station that sells pot.”

But as the show continued the ante was continually raised and it ended up overshadowing the music. Adams shifted between his two Buck Owens model guitars and a piano, and especially when he took the time to change instruments between songs, audience members fed into the artist’s love-hate relationship with crowd banter. Little “woo-hoos,” were responded to by Adams with “Hell yeahs.” Request for songs were answered with Adams leaning into the microphone and saying, quickly and quietly, “no.”

As the show continued, Adams, never one to miss a chance to be self-deprecating started to pick on everything from the sad nature of his catalog, to his hair, to what his life and songs would have been like if Prozac where around when he was a child. That comment, actually spurred one of the better impromptu songs of the evening, with Adams’s playing a sing-songy happy melody with lyrics about climbing trees, wearing yellow pants and eating cake. The guy is damn funny.

After that impromptu song he tore through several more “real” songs, but didn’t seem to be focusing on each note, as he has at previous shows.  Two music aficionado friends of mine who also attended the show, (and are also big Adams’ fans) said afterwards that they felt he was playing very loose, almost simplified versions of some of his songs.  While I hadn’t thought of it during the show, mulling this back over in my mind I realized they were quite right. When Adams played the Su Teatro Theatre in Denver last fall to a crowd of less than 300, his playing was sharp, pointed and refined, with heavy emphasis on accent notes and intricate lead riffs between strummed chords.

This show, still had some well-played songs, but simply well-played without the little ornate gifts that Adams is often known for throwing in. And maybe that’s why it was so easy to focus on the banter. I’ll remember other Adams shows for his playing, this one though, was all about the “conversation” between Adams and the crowd (as this review has already proven since I’ve talked so little about specific songs).

During some song break, when a schmuck yelled out “play the good one”, Adams launched into a diatribe about hecklers and proceeded to play a long song that totally ripped apart a few of the louder audience members, including that dude. The song was appropriately cutting and biting, but even Adams said that maybe he had gone too far with it. My take: if you’re gonna have the balls to yell out something at a quiet show, you better have the balls to stand there and take whatever is thrown back at you. The rest of the audience seemed to agree with that, as that on-the-spot song got the biggest applause of the night, except for Adams’s set-closing “hit” “Come Pick Me Up.”

Take away the poetic songwriting. Take away his musical ability and Adams is still, at his core, an entertainer. He’s enthralling to watch. His OCD tendencies, his insecurities, his charisma and his humor, all blend to make a absolutely enthralling character that you can’t take your eyes off of, and that the aforementioned ladies melt over.  Unfortunately though, this show was more about his character than the music, and that’s a shame, even if it was still fun.

Having seen Adams twice now, in these intimate acoustic settings with just a guitar (I’ve seen him many more times with The Cardinals), a mic and a piano, makes me yearn for The Cardinals again. Adams songwriting is stellar, and it is what made me a fan, but Adams with The Cardinals is monstrous beast of a rock band with a poetic catalog supporting it and I want to hear that righteous rock and roll sound from him again.

Side note about the theater: The Buell is a big and very attractive theater, that feels way more massive than the already impressive capacity of just under 3,000. But the room, which is usually home to symphonies and plays, has a staff that is not well equipped to deal with rock (or in this case singer/songwriter) shows.  I found them unprofessional at every turn. While warnings were posted and announced over the PA before the show about using cellphones during the performance, it wasn’t cell users who were the problem. It was the ushers, trying to control it. Shining a flashlight into a whole section of people just to stop one person from sending a text or shooting a photo is way more disruptive than just allowing the  non-compliant jerk to do their thing. The ushers in my section also paced in and out of the squeaky auditorium door about 50 million times during the show. One of them was even bold enough to drag two chairs noisily down the back aisle. Really? C’mon! Get your act together, Buell staff!

25. Song picking on the crowd in general