Trending Stories from The Marquee
You are at:Home»Uncategorized»SnowBall Music Festival
By Marquee Magazine on March 8, 2012 Uncategorized 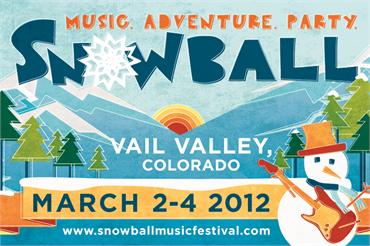 For three days in March, a corner of Avon is transformed into a village of live music, featuring dozens of acts spread across four stages – and covering a range of styles from traditional (Leftover Salmon, Trampled by Turtles) to digital (Bassnectar, Major Lazer) and beyond (Snoop Doog, TV on the Radio). The festival is not for the meek in spirit, however. You have to battle the elements in order to reap the benefits.

Festival goers headed westbound on I-70 were greeted by a snow storm that delivered icy roads and low visibility en route to the opening day’s events. The skies might have been clear in Avon, but the first night was also bitter cold (a high of 16 and a low of 7). And the best way to stay warm is to dance – packed into a crowd of people jumping around keeps the blood circulating.

For a second-year event, SnowBall has big aspirations and is on its way to achieving them – as evidenced by their headliners – but at times the festival still seems to be searching for its identity. Organizers definitely tried to cater to Colorado’s eclectic musical tastes – from organic jams to booming bass – although some attendees who weren’t aficionados of electronic music felt left out in the cold at times.

The majority of the crowd, which skewed heavily toward younger electronic music fans, definitely agreed with the festival’s DJ-heavy schedule. Acts like Mimosa, Figure and Minnesota had the Groove Tent packed almost all weekend, and played truly energized sets for appreciative fans.

Rock-based acts like TV on the Radio and Deer Tick drew good crowds too (and played great sets), but if their fans wanted to plot a course of similar sounds throughout the weekend, they had fewer options. Meanwhile, jam scene giants Leftover Salmon showed up as ‘secret special guests’ for a Sunday afternoon set, but seemed like a musical anomaly amidst the electronic offerings.

A festival of this size will always have some missteps – for example, AfroMan was a no-show on Sunday, and Figure failed to materialize at an after-party he was supposed to play – but the good stuff far-outweighed the bad. For every mishap, there were a handful of amazing things in counter-balance.

While I enjoyed every set I caught over the course of the weekend (and there were some tough choices at times), the highlights were Major Lazer, Figure, Snoop Dogg and Unknown Mortal Orchestra.

Major Lazer’s sunset performance Friday night was among the most energetic and frenetic of the weekend. The lineup is headed by Diplo at the mixing console, alongside two MCs and two dancers who each worked to keep the crowd as hyped as possible. The heavily chopped dance beats kept the crowd moving and the cold at bay from beginning to end. Walshy, one of the visiting MCs from Jamaica, went crowd surfing deep into the audience on up-stretched arms.

Rising dubstep star Figure had an afternoon set in the Groove Tent on Saturday, and although it started 45 minutes late, the crowd was assured late was better than never. His style bridges passions for bass music and horror movies. His set included pitched down samples from Halloween, a remix of Danny Elfman’s Beetlejuice theme and a new track he debuted called “Werewolf,” among others. Inventive drops, tight mixes and grizzly bass tones made his set a definite highlight amongst a talented crop of DJ/producers performing at the festival.

Snoop Dogg’s headlining set Saturday night was a testament to his iconic stature in the world of hip-hop and partying. He seemed to draw the biggest crowd out of anyone, and held everyone’s attention from beginning to end. Backed by a full band, and kept company on-stage by a handful of entourage (including one in a humungous dog costume), Snoop rolled through a mix of new and classic material that gave everyone a little taste of what they wanted. He even briefly covered House of Pain’s anthemic “Jump Around,” which got the crowd primed for his classic “Who Am I?”

Unknown Mortal Orchestra didn’t have a ton of buzz in the electronic-oriented crowd, but the three-piece rock outfit with a deceptively large-sounding name gave an inspired performance in the Ballroom tent on Sunday afternoon. Their sound owes a heavy debt to late 1960s garage and psych bands, but with a certain post-grunge flair. They play a tight show of infectiously groovy rock and roll, and are definitely worth checking out, if you see them on a bill sometime.

The other noteworthy aspect of the festival lineup was the diverse group of Denver based acts who held their own against out-of-towners and national acts. Sauna played a high-spirited set of garage rock early on Saturday that was a fun way to kick off the day, and a nice break from all the programmed beats. Electro-pop-meets-dance-rock outift ManCub played a great set Sunday afternoon, drawing a crowd with expertly triggered drum machine patterns, catchy synth melodies and distortion pedals. The Mile High’s DIY dance favorite Pictureplane definitely got the crowd moving too during his up-tempo set.

Overall, it was a great weekend, and the festival seems like a welcome addition to Colorado’s festival calendar. Yeah, it’s cold, but that’s also what makes it fun – it adds a degree of difficulty to surviving the whole weekend, which in turn makes the musical pleasures that much sweeter – you have to earn it.