Trending Stories from The Marquee
You are at:Home»Features»4/20 Concert Rundown
By Marquee Magazine on April 1, 2012 Features, Festival Coverage 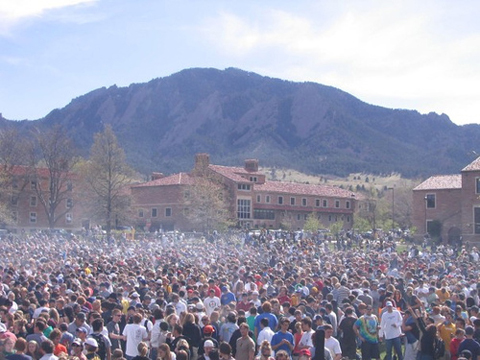 The Colorado medical marijuana movement has had some triumphant moments in the last year, while also weathering some pretty devastating storms. While the state struggles to figure out what a movement is all about, patients and recreationists alike can’t help but celebrate loud and proud on April 20.

Of course, the campus smokeouts are a huge part of the festivities, but after the smoke has cleared and the sun has dipped behind the mountains, the musical celebration begins. This year, like years past, local venues and promoters have worked to find that quintessential act to suit their crowd. (For a complete listing of all 4/20 shows, please refer to our calendar section.) Medicate responsibly.

For years, The Motet has been getting massive traction by playing other people’s music on special events. Their Funk is Dead presentation of “funkified and energized” Grateful Dead material this past year was so strong that they’ve taken the show across the country to rave reviews. But for 4/20 the band won’t be playing other artists’ work, instead they’ll be returning to the funky afro-beat and jazz sets of their original material, with a very safe bet on a few stoney covers thrown in for good measure.

The magic of the 4/20 holiday is that not all stoner shows have to be about reggae, or jam bands or traditional pothead mainstays. Enter Akron/Family. The freak folk trio has a pastoral sound that is open and vast, a sharp contrast to the band’s normal environs of Williamsburg, Brooklyn — or maybe that sound is an escape from home. While much of the group’s material could easily accompany bedtime fairy tales, there is still a rock edge that expands and compliments the delicate side.

With obvious hearts on their sleeve nods to the newgrass pioneers before them, Head for the Hills graciously tip-toed into the Colorado bluegrass scene in the mid-2000s. But now, with a seasoned resume of accomplishments under their belt and some wildly successful album releases, the band is standing shoulder-to-shoulder with many of their predecessors, and in the process creating their chapter in the ever-continuing story of bluegrass.

As The Marquee went to press Ray J was busy quashing tabloid fodder about alleged sex tapes between he and the departed Whitney Houston. J vehemently denies any existence of any explicit materials. But the cousin of Snoop Dogg, and the brother of singer Brandy Norwood is not new to dealing with tabloids. In 2007 a tape of he and Kim Kardasian was leaked. Ray J will perform unplugged for this set, which is being billed as “The Official 4/20 After Party.” In addition to J, performances will be held by DJ X, Johny Rocketz, Hypnautic, King Tef, and HHR3.

At a hefty eight pieces, The Last Riot may seem large, but when their set starts, they come off as gargantuan. [You know, I’ve always liked that word — “gargantuan” — and I so rarely have an opportunity to use it in a sentence.] The horn section is bouncy but tight and with that many folks on stage the group can’t help but be versatile. It’s all funk, but the group can slip from sultry, with the help of vocalist Chelsea Sahleen, to more gritty soul with the help of guitarist Jeremy Campbell’s vocals.

The hip-hop duo Zion I made up of producer and DJ AmpLive and emcee Zumbi, has been heralded as carriers of the torch for the underground scene. Urb said that they’re turning their “underground crusade into an overground movement.” They’re based around forward-thinking, thoughtful hip-hop, and while they’re hard at work on a new full-length album Shadow Boxing, due in the fall, they just released a brand new free download The Levity Mixtape to hold fans over. The mixtape features 11 tracks of unreleased material and is chock full of collaborations with artists like Bassnectar, The Grouch, and Fashawn, to name a few.

Supercollider is exactly what a modern jazz band should be. It holds onto the traditions that got them there, and cradles it with playing that is beyond tight. The band’s members are a who’s who of the Front Range scene — Greg Harris, Zach Littlefield, Jon Gray, Jonathan Stewart, Garret Sayers, Mark Donovan and Dan Schindt. But, add in any of the “revolving” members — of which there are nearly a dozen — and the name of the group becomes so very apropos. Nearly every player is involved in, if not the center of, other projects around Colorado, and Supercollider almost seems like their playground.

In the world of dubstep Levitate is as big as the Broncos acquiring Manning, not that anyone in the crowd will remember. Curated by Elm and Oak, who hosted last year’s Levitate at the Boulder Theater, the Colorado label took the dub concept of a massive drop and found a way to make it even bigger. The English-born Rusko, who just released his latest album Songs in March, has dedicated himself to bringing a brighter side of dubstep to the community. Ironically, Rusko will be releasing a collaboration with Cypress Hill in April titled simply, Cypress X Rusko. The first single is “Roll It, Light It.”

Let’s face it, Cypress Hill could play anywhere on 4/20. But there’s a reason that they are now playing their second straight 4/20 at the Ogden (technically last year their show was on the 19th, but it was still part of the same celebrations). The multi-platinum band has been together for a quarter of a century, and their 1990s hits “Insane In The Brain,” and “Hits From The Bong” still stand as some of the most anthematic stoner tracks of all time.