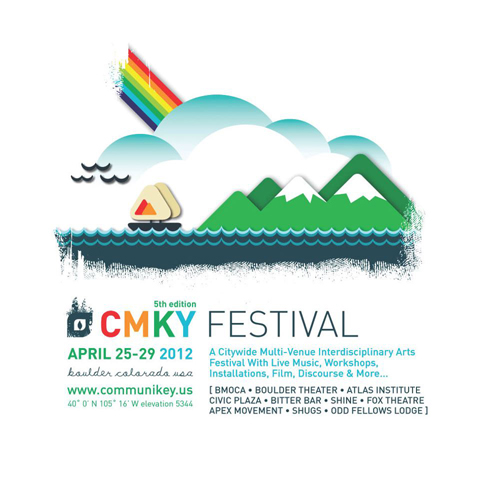 Festivals are a dime a dozen these days, but festivals that attempt to incorporate an entire town, and spread a broad message to the community are such a huge undertaking that many promoters just opt for a simple music lineup.

Communikey (CMKY) is a Boulder-based interdisciplinary organization dedicated to social, cultural and ecological innovation through creative process. The group focuses its efforts and attention to the intersection of sound, design and technology in artistic forms that are under-represented.

As an example, the Communikey Festival 2012 theme, “MicroTopias,” asks artists, festival attendees, and the community to create the worlds that they wish to live in — to empower and abandon the notion of the impossible and remain open to what is wondrous about the world.

MicroTopias can range from an instantaneous magic moment between individuals, to an orchestrated collaboration between hundreds. Whether temporary or long-term, consciously created or spontaneous, these are the spaces that emancipate individuals from our self-imposed limitations. Not out of the ordinary, but definitely extraordinary.

While the scope of the festival goes way beyond music, The Marquee has highlighted some key performances for Communikey that can be enjoyed as a festival pass holder, or in an a la carte fashion.

Performance artist, composer and musician Laurie Anderson has a resume of experimental work that is long, storied and magnificent. Anderson started performing in the late 1960s. She became a pioneer in the electronic music world and has even invented several devices that she uses in her shows.

For her  most recent project, “Dirtday,” Anderson explores politics, theories of evolution, families, history and animals in a spoken word piece that alternates with solo violin work and electronic soundscapes.

MEN focus on the energy of live performance and radical potential of dance music. Their music speaks of issues such as wartime economies, sexual compromise, and the demand for liberties through lyrical content and an inventive, high-energy stage show. The group began in 2007 with the DJ/production/remix team of Le Tigre members JD Samson and Johanna Fateman. With Le Tigre on hiatus, when the duo began to write new songs, it made sense to merge their efforts with JD’s other new project Hirsute. JD and Hirsute members Michael and Ginger now comprise the core of MEN, with Johanna and artist Emily Roysdon contributing as writers, consultants, and producers.

DJ Sprinkles (aka Terre Thaemlitz) is a musician, public speaker, and owner of the Comatonse Recordings record label. His work critically combines themes of identity politics with an ongoing critique of the socio-economics of commercial media production. This diversity of themes is matched by Thaemlitz’ wide range of production styles, which include electroacoustic computer music, club-oriented deep house, digital jazz, ambient, and computer-composed neo-expressionist piano solos.

Peaking Lights is the home-recording project of Wisconsin based husband and wife duo Aaron Coyes and Indra Dunis. Coyes earned their admission into the DIY music scene by building their instruments from re-purposed scraps and hand-making their synthesizers, and Dunis’s hypnotic vocals add a sedative element to their gauzy and psychedelic sound. They released their second album, 936, in 2011 on the analog-passionate label Not Not Fun.

German musician Nils Frahm captures the essence of the piano from the inside out, literally. The classically trained soloist has created sonic landscapes that are imaginative and ethereal and have caught the attention of peers like Thom Yorke and Peter Broderick. His nocturnal improvisations are a wonderful blend of experimental recording techniques, and unconventional instruments and materials. Frahm’s third release Felt is a contemplative balance of his scholarship and his fresh perspective. Frahm is the director of Durton Studio based in Berlin.

Detroit native Kyle Hall released his debut single “Plastik Ambash” on Omar-S’s FXHE imprint at the age of 15. Still under 20, he has become a phenomenon, drawing comparisons to his mentors, including Omar-S, as well as Theo Parrish, Carl Craig, Rick Wilhite and Mike Huckaby. Despite his young age, Hall brings to the DJ booth an admirable old-school sensibility: strictly vinyl, like the generation before him. He continues to expand the multifaceted sound of Detroit via his own label, Wild Oats.

Lulacruza is an electronic folk duo at the junction of the hypermodern and the ancient. Their music weaves together hypnotic female singing, traditional South American instruments, field recordings, and electronic manipulation. Lulacruza’s research on the contemporary state of ritual music took them to their latest project, Esperando El Tsunami, a documentary and “visual album” made in collaboration with Vincent Moon. Created on the road while traveling across Colombia for two months, the film follows Lulacruza as they meet and improvise with traditional musicians in their regions.

Electronic-R&B monarchs, Young Pharoahs have gotten the press many artists would kill for. Live for the Funk called the Denver group “An interesting breed of R&B soul. They produce chopped rhythms and amorphous chords to back some excellent traveling melodies. The vocals are so well recorded and harmonized it’s disgusting.” The Denver Post said that they are “intoxicatingly brazen and bewildering… experimental electronic cyber-soul with the head of an android and the heart of a romantic.”